Salman Khan released the new poster of Bharat, which also features Katrina Kaif, today and this Hollywood celebrity is completely in love with it

The new poster of Ali Abbas Zafar's Bharat released today. As opposed to the poster that was unveiled yesterday, we are introduced to the younger version of Salman Khan in the new one. The Dabangg actor's new poster is all about Bharat Ki Jawaani and it did remind us of his look from Hum Aapke Hai Koun. Salman is seen in a retro avatar, set against the backdrop of a circus. Along with Khan, we also got a glimpse of Disha Patani. The actress plays the role of a trapeze artist in Bharat. Meanwhile, Salman is receiving praises from all around the world. From his fans to Bollywood celebrities, everyone is raving about the actor's look. Also Read - Happy Birthday, Disha Patani: 5 FACTS about the Malang actress that will blow your mind

And a Hollywood celebrity has also fallen for Salman's young and dashing avatar from Bharat. The celebrity in question is none other than Paris Hilton, who is an actress/fashion designer/ model/singer by profession. This may sound amusing to you but the diva is smitten by Khan's look. Her comment on the actor's Instagram post at least suggests so. Take a look: Also Read - Rekha, Aishwarya Rai, Smriti Irani – 7 actors who dropped out of movies before Kartik Aaryan for contentious reasons 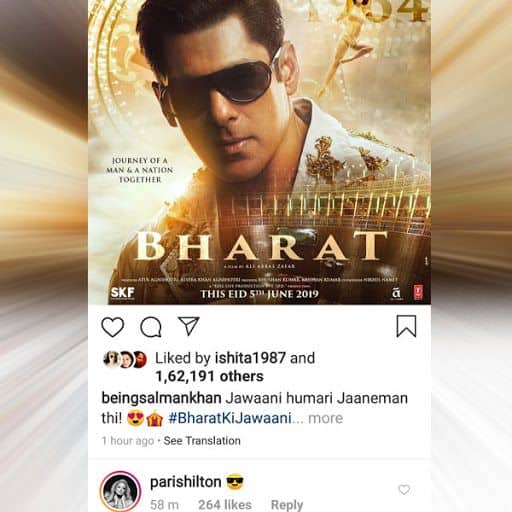 For the ones unaware, Salman is good friends with Paris. Back in 2014, when Hilton visited Pune for Venkys founder Bala's party, she met Dabangg Khan and got along with him. She also befriended singer Mika Singh and the trio had a blast that day. They exchanged pleasantries, posed for pictures and danced till the wee hours of the morning. Reports suggest that Khan had gifted his favourite and iconic bracelet to the actress back then. Cut to 2019, looks like, Hilton is too excited to watch her friend, Salman's next project, Bharat.

Talking about the film, it is produced by Atul Agnihotri and Bhushan Kumar. Bharat, an official adaption of the Korean film An Ode To My Father, features Katrina Kaif, Disha Patani, Tabu, Jackie Shroff, Nora Fatehi and Sunil Grover in lead roles. Salman will be seen sporting five different looks in this one.

The trailer of Bharat is set to release on April 24 and we guess it will surpass our expectations. As far as the release date is concerned, the movie opens in cinemas on June 5, 2019.