Bhavana and Naveen made for a picture perfect couple at their reception.

22nd January was a special day for Malayalam actress Bhavana as she got married to long time beau - Naveen. It was a simple wedding ceremony held at Thiruvambadi temple in Thrissur. Bhavana bedazzled in gold and made for a stunning bride. The wedding was attended by only close friends and family, Manju Warrier was also present. This wedding ceremony was followed by a glitzy reception in the evening at the Jawaharlal Nehru Convention Centre. Mammootty and Prithviraj along with a few other actors amde their presence felt at the reception. But one can't deny that many stars were absent from the event. Earlier reports suggested that Bhavana had chose to call only her close friends from the industry. Bhavana looked gorgeous in a golden lehenga while Naveen kept it stylish with a Kurta and a waistcoat. They sure made for a handsome couple. Also Read: Bhavana dazzles in gold at her wedding to Naveen – view INSIDE pics! Also Read - Bhajarangi 2 teaser: The action seems to be next level in the Shiva Rajkumar and Bhavana starrer

The wedding celebrations kicked off with a fun filled crazy Mehendi ceremony that had her closest performing to some peppy Malayalam songs. Bhavana along with girl gang seemed to have had a blast, from the looks of the pictures that went viral online. The actress received a real surprise form Priyanka Chopra who specially sent out a video message just to wish her. "I just wanted to wish you a very happy married life. This is going to be a big step in your journey and I just want to say good luck. You're an extremely feisty, brave and amazing woman and I admire you a lot. Much love and always," Also Read - Bhavana dazzles in gold at her wedding to Naveen - view INSIDE pics! 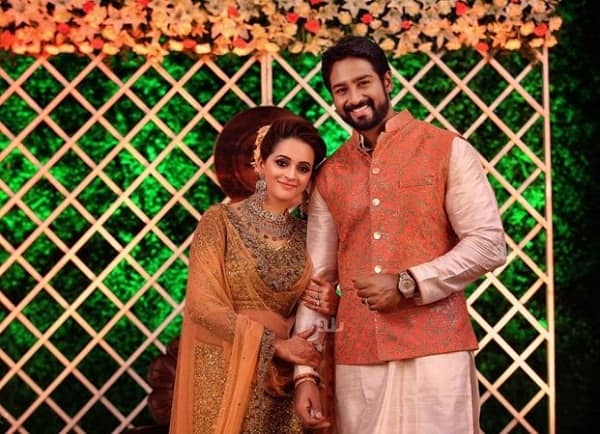 The couple first met on the sets of PC Shankar's Romeo in 2012. They have been dating ever since. The couple was to get engaged in 2014 but due to prior commitments it got pushed. Last year in March amidst close friends and family the two got engaged.