Sanjay Dutt does justice to his comeback but Bhoomi the film fails him. 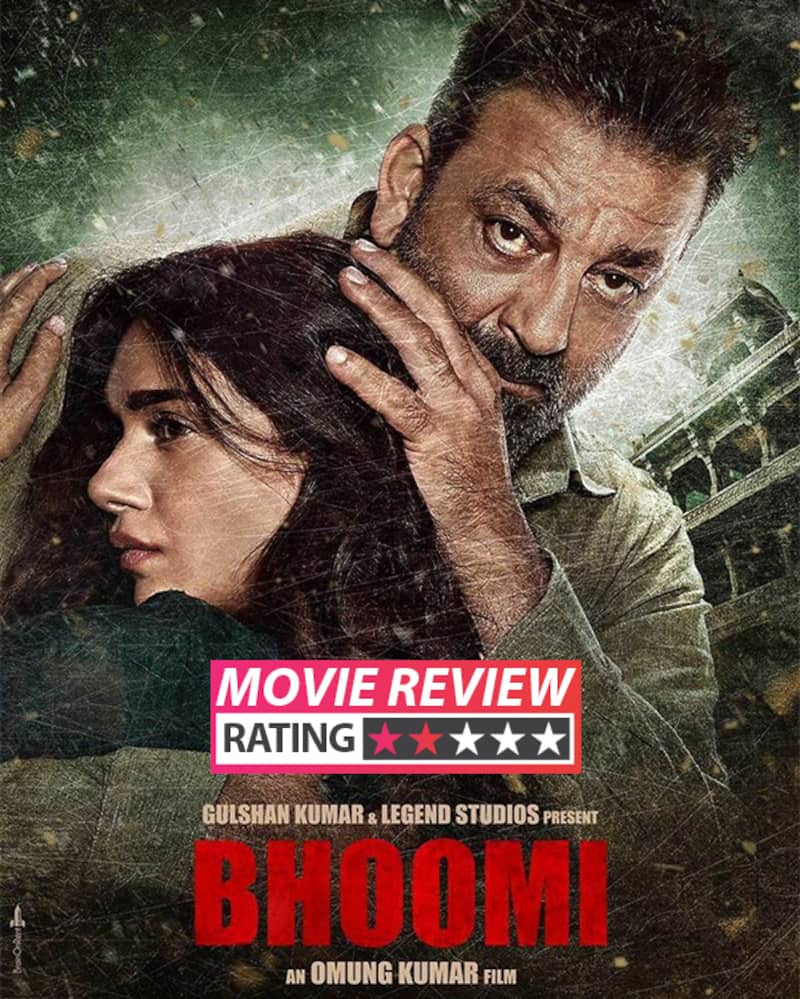 So finally, we are able to see Sanjay Dutt on big screen after a long time, that too in a leading role. Bhoomi marks the comeback of the immensely popular actor, who had to take a break from acting to complete his jail sentence. The movie is directed by Omung Kumar, who previously made Mary Kom and Sarbjit. Aditi Rao Hydari plays the female lead in the movie. Here's our review of Bhoomi… Also Read - Naga Chaitanya-Sobhita Dhulipala, Rashmika Mandanna-Vijay Deverakonda and more: South Indian stars who ruled headlines thanks to their alleged affairs

What's it about Also Read - From Anurag Kashyap to Kapil Sharma: Celebrities who went to rehab centers to fight addictions

Arun (Sanjay Dutt) is a single father to Bhoomi (Aditi Rao Hydari), a sprightly wedding planner with a slight stammer. She is in love with a doctor (Siddhant Gupta), and their marriage is fixed by their parents. Bhoomi is also lusted after by her neighbour, and when his advances are spurned, he turns to his evil, sadistic cousin Dhauli (Sharad Kelkar) for help. On the eve of her wedding night, Bhoomi is kidnapped and brutally gangraped by the villains. When the law fails to give his daughter justice, Arun takes revenge on the perpetrators on her behalf. How he carries out his vendetta is what the rest of the movie is all about. Also Read - Isha Ambani-Anand Piramal to Preity Zinta-Gene Goodenough: Celebs who are blessed with twins [View Photos]

Also read: A day before Bhoomi's release, Sanjay Dutt begins the shoot of his next film Saheb, Biwi Aur Gangster 3

Sanjay Dutt. Though the movie's skewered screenplay lets him down a lot, his anguished performance is what makes us invest in the proceedings. He is terrific in scenes where he expresses his anguished helplessness when the society and the law fail him. It also has to be appreciated that he chose to take a role that is fitting for his age as his comeback.

As a victim of masculinity at its worst, Aditi Rao Hydari is fantastic as Bhoomi, even though the movie often shifts to her father's perspective. Thankfully, unlike Kaabil, her character is not killed and she remains a strong force around her father. The scene where she asks her spineless fiancee to scrub away her phone number from her wall is the highlight of her performance. Sharad Kelkar is fine as the primary antagonist, though his part is quite sketchily written making his character a caricature.

Some of the decent moments is in the first half, especially when the movie shows the aftermath of the ghastly rape (which, however is gaudily shot). The aborted wedding sequence that follows is tactily filmed with silences saying a lot more than words and making the right impact. This is perhaps the only scene that you would want to remember after the movie is over.

Omung Kumar is known for his melodramatic style of storytelling and Bhoomi suffers from excess of that. Be it in the father-daughter bonding scenes in the first half or the courtroom sequences in the second, the script injects an overdose of melodrama in the scenes to manipulate the viewers. A more restrained direction and narrative perhaps could have worked wonders for the movie. Some of the dialogues, especially mouthed by Dhauli are laughable ('Hide and cheekh'?).

It also doesn't help that Bhoomi's basic theme of a rape victim's family member turning a murderous vigilante has already made its way in three movies this year - Kaabil, Maatr and Mom. With the increase in sexual assault cases in our country, it is great that Bollywood is addressing this concern in the movies. However, Bhoomi lags far behind Kaabil and Mom when it comes to the treatment and believability. Most of the blame should go to the faulty, predictable writing. Your mouth will definitely fall open with the way Omung has depicted the courtroom scenes, embellished with stereotypical hamminess. The cops also don't get a better deal, as they end up being super-irritating caricatures.

Also read: Don't know about patching up with Salman Khan but Sanjay Dutt is having whale of a time with Ajay Devgn -view HQ pics

The revenge saga takes a lot of time to get going but when it does, those sequences are very weakly written and lack logic. While Sanjay Dutt enjoys an action image, here his character's metamorphosis into a killing machine is very unbelievable. Also for a movie talking about women's safety, I have no clue what the need was to insert an item song featuring Sunny Leone. With no purpose other than to titillate the front benchers, this song nearly nullifies the good intentions of the movie. The climax is a typical scene out of '80s and '90s movies, with some laughable melodrama infused in it. In a very under-developed role, Shekhar Suman, returning to big screen after a hiatus, irritates big time.

Strangely, all the four movies - Bhoomi, Kaabil, Mom and Maatr- end up giving the same message, 'don't trust the law to give you justice'. Not a nice impression of our administration!

With its done to death theme, Bhoomi is just old wine served in a new bottle, and does little to stand apart from the pack. The only saving graces are its intentions and the performances by Dutt, Hydari and Kelkar. Bhoomi will benefit a lot for being Sanjay Dutt's comeback. But when it comes to the other way around, well, I do wish Sanjay Dutt would have chosen a better movie as his comeback.