Bigg Boss 11: 7 Lakh per week! That's what Hina Khan, Shilpa Shinde, Hiten Tejwani are getting for being locked up inside the house

Here are estimated figures of what Hina Khan, Shilpa Shinde and Hiten Tejwani are getting for Salman Khan's show 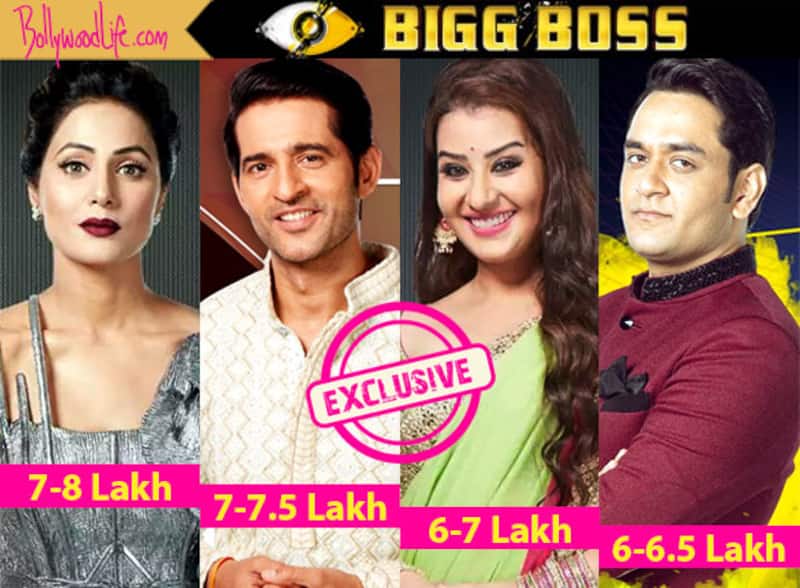 Big Boss is a house of drama, fights, ego clashes and lots of controversies but all of this comes with a price. After all you have TV actresses, reality show stars and producers all under one roof. While the drama is on an all time high, their salaries are even higher. We tried to find out from our sources as to what is the price that they are getting for being locked up inside the house and here is what we came to know about the estimated salaries of this year's Big Boss contestants - Also Read - Hina Khan talks about betrayal in her cryptic posts; fans hope all is well in her relationship with Rocky Jaiswal

Hina Khan is the highest paid contestant of the season. She has been a part of Yeh Rishta Kya Kehlata Hai for 7 long years and hence commands a certain position in the industry. Hina also did Khatron Ke Khiladi 8 this year where she was paid quite well. And that’s where she struck her deal with Colors. She is also said to have been offered a show, once she comes out of the house. Hina has been preparing for Big Boss since the time she returned from Spain after Khatron Ke Khiladi. Everything from her makeup to her costumes are pre-decided. Also Read - Hina Khan dishes out MASSIVE fashion goals as she explores Turkey; the expensive Louis Vuitton scarf has got our attention [VIEW PICS]

Hiten is also being paid quite well for the show. After all the actor has been in the industry for the last 15 years and hence brings along a certain fan following. Though he has said he will maintain his dignity throughout the season, he might have to change his plan to justify the money he is been paid.

Popular TV actress Shilpa had been a part of a big controversy and out of work for almost a year. So that reduced her negotiating power. Still she is being paid quite a decent amount. She has been giving ample amount of masala to the channel right from day one and is hence expected to be rewarded soon with a rise of salary.

Vikas Gupta has been managing content for last 10 years and knows what works on TV. He is ensuring that he justifies the amount he is being paid by his shenanigans.

Priyank has done reality shows like Splisvilla but Big Boss is his first mainstream show. However, Vikas somehow managed to get him a good remuneration than other contestants in the house. He got enough publicity in the one week he spent inside the house. It's being speculated that he might re-enter the house, soon.

Rest of the contestants like Arshi Khan, Benafasha are getting paid a decent amount since they have their body of work behind them. Commoners like Shivani Durga, Sapna get paid as per their performance. Currently they are being paid somewhere around Rs 20,000 per week. Some of the commoners are even working for free as it’s a big launch pad for them.