Bigg Boss 11: First pic from the sets of Salman Khan's show is here!

Bigg Boss 11 is all set to debut on October 1

Bigg Boss 11 is all set to debut on October 1 on Colors. The show, once again, will take up the time slot of 10:30 owing the nature of its content and once again Salman Khan has returned as the host. The last minute prep work before the premiere are going on full swing. And we have the first picture from sets of Bigg Boss 11, straight from Lonavala. Also Read - Trending OTT News Today: Salman Khan roots for Shah Rukh Khan's OTT debut, Tabu-Ali Fazal roped in for Vishal Bhardwaj's spy thriller Khufiya and more

Well, in the following pic, you can see the main entry door of the Bigg Boss 11 premises. As you can see that they have not repainted the logo off the gate. Anybody aware with this year's promotional spree can easily figure out that the design of the eye on the logo is not from this year. In case you were wondering, the logo on the gates was last used for Bigg Boss Telugu. Check out the pic here: Also Read - Katrina Kaif looks as fresh as a daisy as she takes out some time from her Tiger 3 shoot in Austria – see pics 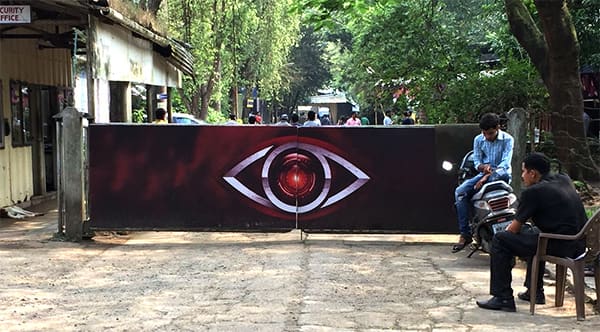 The makers have confirmed three contestants as of now. Haseena Parkar's son-in-law Zubair Khan will sure make on helluva controversial contestant, this year. Though he claims to have left his 'connections' behind in his life, we can hope that there is more for us in store. Then there is the controversy queen, the popular Haryanavi dancer Sapna Choudhary, who will also be gracing the show as a commoner. And then there is self-styled God-woman Shivani Durgah. But unlike the crass Swami Om who graced the show last year, Shivani aims at reclaiming the respect for godmen. She has 2 PhDs from Chicago University, in case you were wondering about her credentials. ALSO READ: Bigg Boss 11 contestant: Haseena Parkar's son-in-law Zubair Khan to participate as a commoner- watch video

Stay tuned. We will update you with more gossips and pics from Bigg Boss 11.