Bigg Boss 12: NOT Lonavala, Salman Khan will introduce us to the 'vichitri jodis' in Goa

It was only a few months ago when Shilpa Shinde emerged as the winner of Bigg Boss 11. Just after the show went off air, the makers declared the auditions for Bigg Boss 12 and we couldn't keep calm. Every year, the show has something new to offer and the speciality of this year are the 'vichtri jodis' that Salman Khan is constantly hinting at through the promos. A total of 21 contestants will enter the show and this time they will be seen in jodis. However, not everyone will be coming in jodis. Some contestants will come in as singles and will be paired up during the show. This has already left the audience excited. This is not it as the makers have decided to take the excitement level a notch higher. Also Read - Srishty Rode and her pet Tiara pose for adorable pictures as they are spotted on an evening walk — view pics

The invites for the show's launch are here and for the first time, the show will be launched not in Lonavala but in Goa. Yes, you read it right. Salman Khan's show's press launch will be held in Goa. Though the makers haven't revealed anything regarding the show, this invite is hinting that this season might be a breezy affair. A source revealed, "Every year COLORS comes up with unique themes and exciting ideas to launch their marque and beloved show Bigg Boss. This year around also the channel came up with the fun idea of launching the upcoming Bigg boss season 12 in Goa with none other than Salman Khan, the host. The invite too, with its beachy feel, is a total eye-pleaser and specifies a dress code, calling the invitees in sunny and colourful clothing.” We guess it is to capture the essence of the new house. 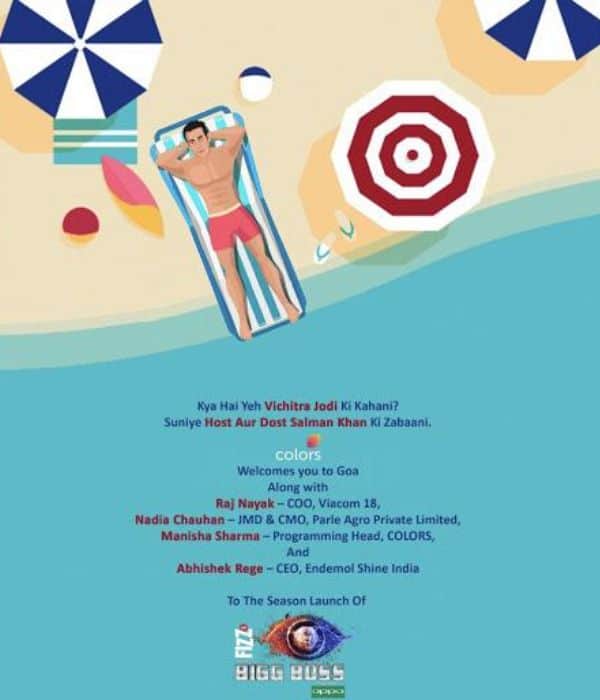 Also Read - Bigg Boss 12’s Srishty Rode is having a gala time in the Maldives, and THESE pictures are proof

Are you eager for the show? Tweet to us @bollywood_life. For more scoops and updates, stay tuned to BollywoodLife.