The finale of the second season of Bigg Boss Telugu is set to happen tomorrow and we can't contain our excitement over it. The controversial show, hosted by Nani, has surprised viewers for over 100 days, thanks to shocking eliminations and exciting tasks. Just before the finale week, rapper Roll Rida got eliminated from the show. So now we have five contestants who are in the race to bag the title of Bigg Boss 2 Telugu winner and they are Kaushal, Tanish, Deepthi, Geetha Madhuri and Samrat. Also Read - Aditi Rao Hydari asking for this WHOPPING fee for Telugu films?

To know your opinion, that who has the strongest chance to emerge as the winner of the show, we conducted a poll and honestly, we are not surprised by the results. Right from the beginning of the show Kaushal Manda was viewers' favourite and the same reflected in our poll results as well. The actor received a humongous 74 per cent of votes! Well, honestly the numbers are enough to tell you that audience has already declared Kaushal as the winner of the show. The actor's popularity has been his biggest advantage and with the support of fan club 'Kaushal Army' it looks he is all set for victory. 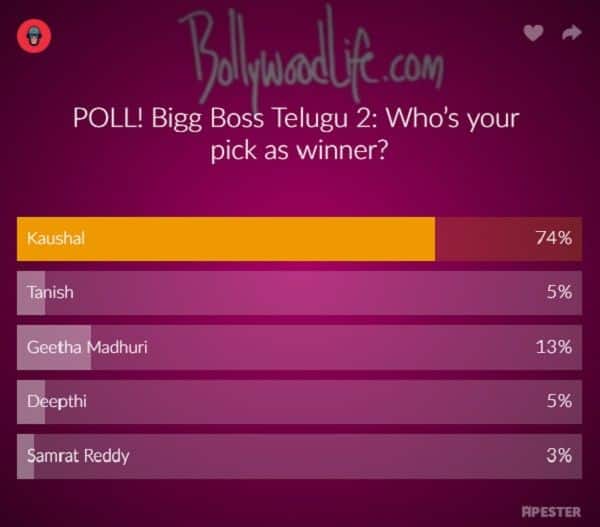 The one with the second-highest number of votes is Geetha Madhuri, with 13 per cent of votes. The votes clocked in by Tanish, Deepthi and Samrat Reddy are in single digits, which means that the viewers are completely convinced that Kaushal will win the show single-handedly. Though, we don't know a twist might change things in the finale episode of Bigg Boss Telugu 2. So, apart from Kaushal, who do you think has the chance to emerge as the winner? Tweet to us...