It is all about couple capers in this season of Bigg Boss 9. Also Read - Bigg Boss 9 episode 52: Priya Malik nominates Suyyash and Digangana for evictions; Rishabh Sinha's big fight with Mandana Karimi leaves her teary eyed!

With the theme being ‘Double Trouble’, the love stories of couples will keep the viewers glued onto the show. One of the jodis that might profess their love on Bigg Boss 9 are Rochelle Maria Rao and Keith Sequeira. The former was seen on IPL Extra Innings as a host while Keith is a VJ turned actor. He was seen in the film Sixteen, which was based on the lives of teenagers. Also Read - Bigg Boss 9 Episode 44: Priya Malik accuses Rishabh Sinha of sexual assault; Kanwaljeet Singh makes Mandana Karimi cry!

Talks of the two being a couple have been doing the rounds for quite some time now. Rochelle and Keith have professed their love for each other on a social networking site just before entering the show. Keith has updated his relationship status on social networking, while Rochelle has spoken about how being inside the house with someone she loves makes it very interesting. With so many couples inside the house, we might just get treated to some heavy-duty romance. Also Read - Bigg Boss 9 wild card entry: 5 lesser known facts about Priya Malik that will SURPRISE you!

Double Trouble is all about couples this season. We will see ex-lovers Roopal Tyagi and Ankit Gera on the show. Like many would know, the two did not have an amicable break up with Roopal accusing Ankit of two timing her. After his stint as a musician in Phir Bhi Na Maane Badtameez Dil…Suyyash Rai will also enter the show with his girlfriend, Kishwer Merchant. They have been going steady from quite some time now.

The three couples will be apparently connected to each other with some kind of body belt, which means they will be together almost 24x7. While the final list of contestants will be unveiled tomorrow, such love-ly jodis are just increasing our anticipation! 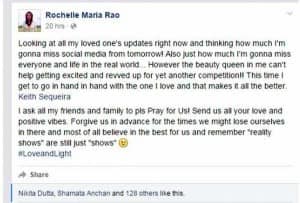