Bigg Boss Marathi: Majority of the people are HAPPY that Rajesh Shringarpore is out from the show

And the verdict on Rajesh Shringarpore's verdict is out!

While it's usually believed that the one who creates maximum number of controversies or gets intimate with a co-contestant is the one who ends up surviving on a reality show. Rajesh Shringarpore's eviction from Bigg Boss Marathi proved otherwise. His elimination came right at the time when his affair with Resham Tipnis had reached its peak. They were almost caught making out under the sheets on the national television. Say for that matter, Rajesh even made a confession that he hopes his wife accepts his feelings for Resham. A perfect TRP booster for the makers of the show. But the audience decided to show him the exit door, by eliminating him for the show despite his desperate attempts to hog the limelight. This only proves how the audience want what they want and they are not here to see any sorts of "love-making" ALSO READ: Bigg Boss Marathi elimination: Rajesh Shringarpore OUT from Mahesh Manjrekar’s show Also Read - Trending OTT News Today: Bigg Boss OTT's 2nd contestant, Karan Johar as an inmate in Bigg Boss, Cartel trailer is OTT's answer to RGV's Company and more

Speaking of which, we also conducted a poll this morning asking our readers on BollywoodLife on what do they think of Rajesh's elimination from Bigg Boss Marathi. Are they happy that he's out? Or was he entertaining? And there...there...85 percent our readers have voted they are glad that Rajesh is out from the show! Now if this doesn't sum up the relief that people have got with Rajesh's elimination then I don't know what will. Also Read - Bigg Boss OTT: 5 Bollywood celebs we want to see in Karan Johar-hosted reality TV show

Check out the poll result on Rajesh's eviction from Bigg Boss Marathi below: 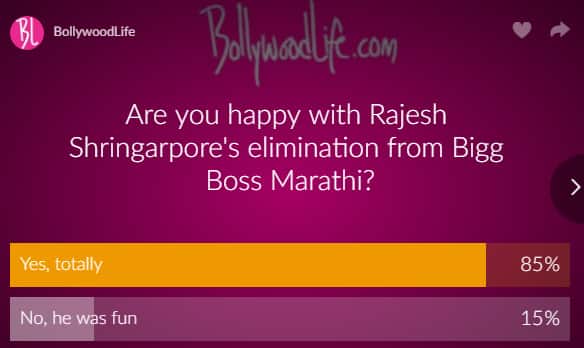 In an interview post the eviction, Rajesh didn't hesitate from speaking about Resham with high regards. Considering Resham is a single parent, Rajesh said it is very tough to be a single parent/single mom anywhere in India and Resham has a fighting spirit. He also said that she did not lose her spirit or live to will despite such hurdles in her life. Rajesh said he appreciates Resham’s never-give-up attitude and would continue to be her friend irrespective of whatever people said. Mentioning what keeps them together, Rajesh added that Resham and his personalities match as both of them are upfront and affectionate and that he would not hide his affection, if he liked someone,.