Rajesh Shringarpore got eliminated from Bigg Boss Marathi over the weekend, but not without causing a stir inside the house. His romance with co-contestant, Resham Tipnis set the tongues wagging, especially because Rajesh is already married and has two kids. It got difficult for Resham to deal with Rajesh's elimination as she broke down as soon as host Mahesh Manjrekar announced his eviction. It looked like the two are deeply in love with each other. However, majority of the fans think that this romance was just for the cameras, like most of the other love stories that we have seen in the Hindi version of Bigg Boss. You see, we conducted a poll last week asking you, our readers if what was happening between Resham and Rajesh is fake or real. Well, the verdict is out and 85 per cent of the fans think that this was just to get ahead in the show, while the rest 15 per cent are of the opinion that this will last even after Resham gets eliminated. Will it or will it not? Well, all we can do is just wait and watch. Also Read - Bigg Boss 16: Farah Khan gets slammed for bashing Priyanka Chahar Choudhary and Tina Datta; netizens say, 'Shame on you for targeting the girls'

Even we were not sure if this was just friendship or a romance that was brewing between the two until couple of days back, when Rajesh, who was in the secret room since past few days, re-entered the main house and openly declared his love for Resham on national TV. Resham told Rajesh that she is scared of facing his wife, he then turned to the camera as if he was addressing his wife and confessed his love for Resham. Rajesh further said he hopes his wife will understand his love for Resham. ALSO READ: Bigg Boss Marathi: ‘Resham Tipnis is just like me,’ reveals eliminated contestant Rajesh Shringapore – watch video! Also Read - Bigg Boss 16: Archana Gautam to Rashami Desai; contestants who were accused of playing ‘woman card’ on the show 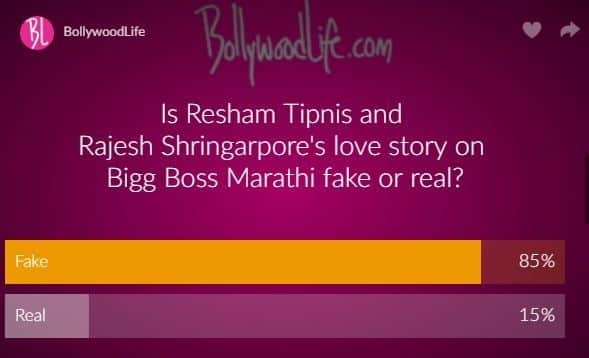 Times Of India got in touch with Rajesh’s wife, Dimple Shringarpore to ask her about this, but she refused to comment as she said, “It would be great if it’s kept personal as I don’t want to comment on this right now.” Well, now that Rajesh is out of the house, it will be interesting to see how Resham will survive on Bigg Boss Marathi without him. Will she give up and get eliminated next? We can't wait to see the drama on Bigg Boss Marathi. Stay tuned as we bring you all the latest updates from the house.