#BLBestof2020: It’s a tie as Tanhaji and Ludo share the Best Film honour

As our yearly thing, we had asked people about the Best Film and the verdict is out. To our surprise, Tanhaji and Ludo have been voted as the Best Film.

If we look back at 2020, we can call it a mixed year. While many things came to a screeching halt due to the coronavirus pandemic, the redeeming bit was the OTT content which increased as many people stayed at home. As our yearly thing, we had asked people about the Best Film and the verdict is out. To our surprise, Tanhaji and Ludo have been voted as the Best Film. Both of them got 32% votes each. Have a look at the result below: Also Read - Forget Maldives, check out Neha Sharma living it up during her vacay in Jaisalmer 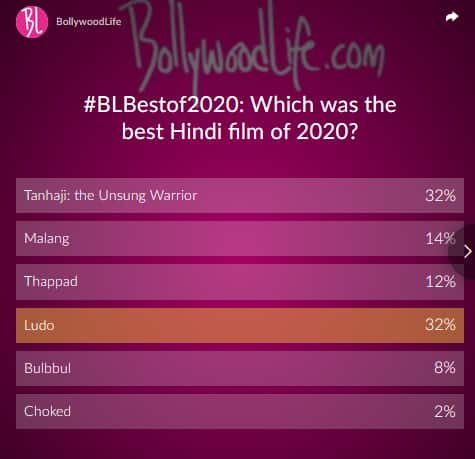 Also Read - #BLBestOf2020: Sushant Singh Rajput BEATS Ajay Devgn and Amitabh Bachchan by a huge margin to be declared the Best Actor of the year

Ajay Devgn roared in Tanhaji, which had massy elements backed by strong content. Saif Ali Khan was superb, too. The action and emo moments left an indelible mark. On the other hand, Ludo was a fun and quirky watch with converging storylines, all of which made an impact. Karma and the unfairness of it was a major theme in this Anurag Basu directorial. Also Read - Ajay Devgn opens up on his 2020: My family life was disrupted; it was a complete mix of emotions

Speaking about the historical doubts some sections had raised over Tanhaji: The Unsung Warrior, including costar Saif Ali Khan, Ajay Devgn had earlier told Hindustan Times, “Most of the history lacks adequate information in the chapters of the history books. Different books are written from different point of views. So it’s very difficult to tread that thin of realism, justify the characters and still be imaginative enough to dramatise the characters so that the audience enjoys it. You’ve to be careful and try to achieve all three.”

The film was Ajay’s 100th film. Opening up about the milestone, he had said, “I have been lucky to be doing different kinds of roles and they have worked too because so many actors struggle to do different things. At that time nobody was doing a film like Raincoat'. I just wanted to try out different things, hence I did it. There was no fear of whether it will work or not. I am glad my risk paid off. A lot of people advised me against such films but today almost everyone is doing such films and they are working.”