#BLBestof3: Padmaavat beats Raid and Pad Man to win the Best Movie title in the first quarter of 2018

Audience has made their choice and Padmaavat is the winner.

Three months of 2018 are over already and hence we had asked you to chose your favourites among the movies that have released till date. You have already chosen Ranveer Singh and Deepika Padukone as your favourite actor and actress in the first quarter of 2018 in our polls. Now is the time to tell you as to which film has found more love from you in the last quarter. It is Padmaavat! However, this is hardly surprising as both Ranveer and Deepika bagged the top positions in their individual categories. Also, we had a hunch you would choose Padmaavat because everything about that film was grand. Right from the controversy that clouded its release to its blockbuster performance - nothing about the film can be called lacklustre. Thus, it doesn't come as a surprise to us that you loved the film and gave it 41 per cent of your votes.

#BLBestOf3: Deepika Padukone voted as the best actress of the first quarter of 2018 for her role in Padmaavat

Ajay Devgn's Raid takes the second spot, but the percentage of votes it has earned is far lesser than that of Padmaavat. It only fetched 25 per cent votes. While it hit the Rs 100 crore mark, it fell short of audience's appreciation, when compared to Ranveer, Deepika and Shahid Kapoor's film. Interestingly, the third spot went to Rani Mukerji's Hichki, which proves that the audience has really loved this film, which was touted as the actress' comeback. Content will always be the winner here! Check out results right here... Also Read - Kaagaz: Pankaj Tripathi and Satish Kaushik's film to reach the hinterlands of India through mobile digital theatres 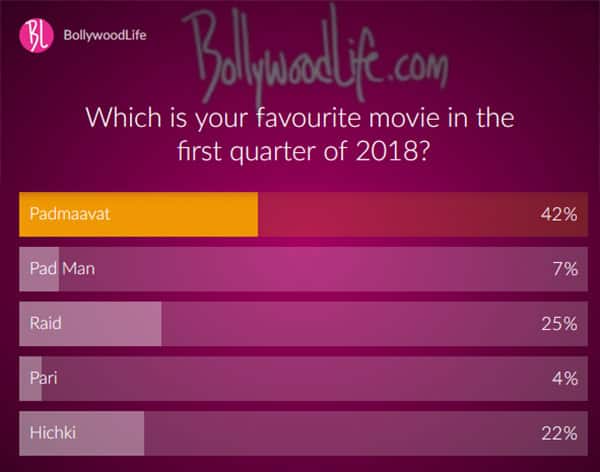 Padmaavat broke several records when it released and is still running at a few theatres. Ranveer Singh and Shahid Kapoor have been honoured with the Dadasaheb Phalke Excellence Awards as well for their act in the film. They were a perfect combo of fire and ice in the film.