#BLBestOf3: Kangana Ranaut BEATS Alia Bhatt to emerge as the best actress of the first quarter of 2019

Kangana Ranut has bagged the spot spot with 37 per cent votes!

In the first three months of 2019 we witnessed some of the greatest performances from the leading ladies of Bollywood, from Kangana Ranaut to Alia Bhatt, these divas not only impressed the critics but also minted big bucks at the box-office! Needless to say, we were in awe too and it was hard to pick to a favourite. And then you guys happened! To know which star gave the most popular performance, we conducted a poll for the best actress of the first quarter of 2019. Also Read - From Alia Bhatt’s Gangubai Kathiawadi to Akshay Kumar’s Bell Bottom – movies that have dared to book their theatrical release dates during the second COVID-19 wave

Actresses like Kangana Ranaut, Alia Bhatt, Taapsee Pannu and Kriti Sanon were nominated in this category. And guess what? The results are out and it is just what we expected! Bollywood’s 'Queen' Kangana Ranaut has fetched the top spot and emerged as the best actress! Also Read - Yoga Day 2021: Alia Bhatt joins the BTS Butter fan club as she posts a fun video of her cat Edward checking out her awe-inspiring postures 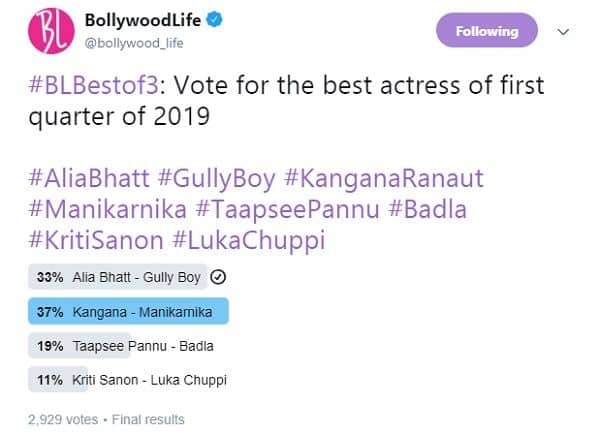 Unstoppable is the word that comes to mind when one sits to think about the work Kangana Ranaut put into the making of Manikarnika: The Queen of Jhansi. Even as a director, she didn't let the performer in her take a back seat and set the screen ablaze. Which is probably why fans thronged to vote for their 'Queen' and made her emerge at the top spot with 37 per cent.

Alia Bhatt's Safeena was to Gully Boy what the actress is to Bollywood; a fresh breath of air with individuality and character. Naturally, her followers on social media went all out to vote for their favourite star, for her amazing act. At 33 per cent, the actress fell marginally short of votes compared to winner, Kangana Ranaut.

It is not easy to hold your own in front of legendary actor Amitabh Bachchan but Taapsee Pannu has done that and how! The actress hit it out of the park in this edge-of-the-seat thriller and fans loved her. Despite strong competition, she managed to garner 19 per cent votes.

While it was her chemistry with co-star Kartik Aaryan that made audience flock to the theatres, it was also Kriti Sanon's screen space as Rashmi that garnered a lot of buzz. Kriti’s fan following may have multiplied with Luka Chuppi, but few translated into votes. Kriti managed to pull a share of 11 per cent.