#BLBestOf3: October, Baaghi 2, Pari, Blackmail, Omerta - which was the trailer that impressed you the most?

Which film's trailer did you love the most - October, Baaghi 2, Pari, Blackmail, Omerta? Vote Now! 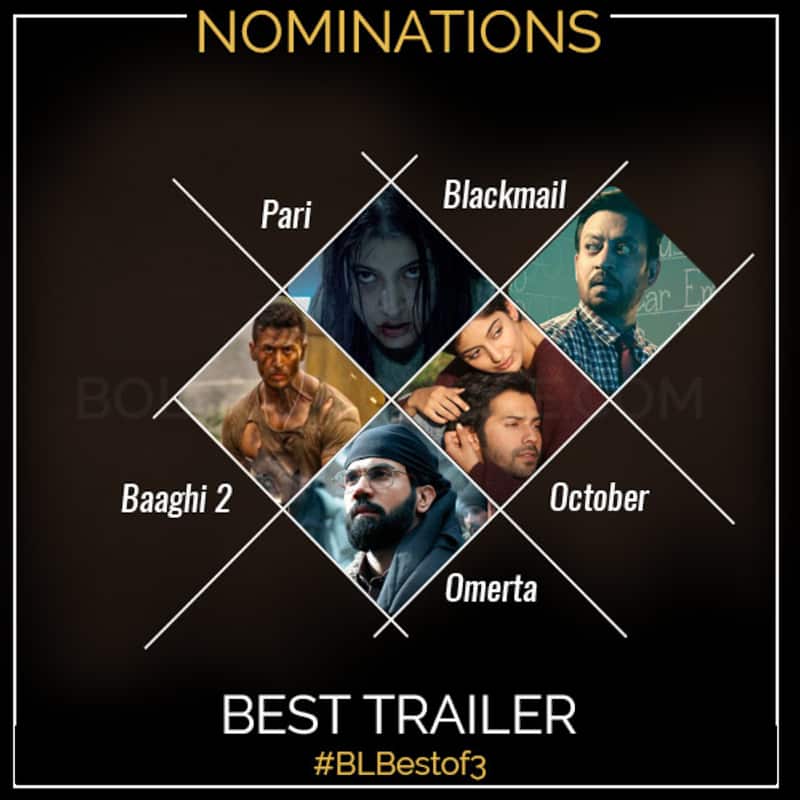 It's that time of the year when you, dear readers, help us choose the best of Bollywood in the first three months. With April already upon us, it is time for us to rate and review the best of the first three months of 2018 in Bollywood. So get clicking and choose your favourite film, actor and actress in #BLBestOf3. Today, we present to you our top 5 trailers of the first quarter and we want to know the one that impressed you the most. Also Read - After Laal Singh Chaddha-Raksha Bandhan's disastrous box office run; these five upcoming BIG clashes may end up losing money

The first quarter of 2018 has seen several interesting film releases, while numerous intriguing trailers were released too. From Pari to October, Baaghi 2, 102 Not Out, Omerta, Blackmail, Sonu Ke Titu Ki Sweety, Raid and several other movie trailers grabbed our attention. But which one was the best? Well, we think the trailers of Varun Dhawan's October, Tiger Shroff's Baaghi 2, Anushka Sharma's Pari, Irrfan Khan's Blackmail and Rajkummar Rao's Omerta were the most interesting ones in the first half of 2018. We tell you what we liked about the trailers right here, post which you can vote for your favourite in the poll below! Also Read - David Dhawan Birthday: Coolie No.1 to Haseena Maan Jaayegi; Blockbuster movies of the filmmaker which starred Govinda

From the visuals to Varun Dhawan - Banita Sandhu's adorable chemistry and the intriguing flow of the story, everything got us excited after watching the October trailer. The background score and the fact that Shoojit Sircar did not give away too much of the story in the trailer also impressed us a lot. (ALSO READ - #BLBestof3: Padmaavat, PadMan, Pari, Hichki, Raid - Which is your favourite movie from the first quarter of 2018?)

The action packed trailer of Tiger Shroff and Disha Patani's Baaghi 2 was really fantastic. From the emotional sequences to the fight scenes and everything else made Baaghi 2 catch our attention instantly.

Anushka Sharma's Pari has intrigued us ever since it was announced, but the trailer took our excitement to a whole new level. The trailer not only left us guessing what will happen next, but the visuals and background score also sent a chill down our spine!

The story of a man secretly blackmailing his cheating wife is intriguing in itself, but the quirky trailer of the movie, along with Irrfan Khan's performance and the hilarious jokes made us laugh out loud and get excited for the movie.(ALSO READ - #BLBestOf3: Deepika - Shahid, Tiger - Disha - Which is your favourite jodi from the first quarter of 2018?)

Rajkummar Rao never fails to impress us and he continued to do so with Omerta. His intimidating terrorist avatar paired with some strong, violent visuals and hard hitting dialogues in the trailer had us hooked. But it was the way of story telling in the trailer itself that impressed us the most.

Anyway, check out all the trailers above and vote for the one that impressed you the most in the poll right here!

With several intriguing films coming out in the remaining quarters of 2018, we are sure we are going to see some even more impressive trailers. So stay tuned to BollywoodLife for all the dope and updates from B-Town right here.