#BLBestOf6: Salman Khan-Katrina Kaif's pair is the best jodi of the first half of 2019 - view poll result

We saw a lot of fresh jodis and old time pairs re-igniting their charm for the silver screen. But Salman Khan-Katrina Kaif from Bharat owned it all. They contested with Shahid Kapoor-Kiara Advani from Kabir Singh, Anil Kapoor-Madhuri Dixit from Total Dhamaal or Ranveer Singh-Alia Bhatt from Gully Boy and won by a large margin.

Salman Khan and Katrina Kaif have a chemistry that is hard to resist. Bharat director Ali Abbas Zafar once told us that, "As soon as you see, Salman and Katrina together the reaction usually is 'Oh, my God. They’re made for each other'." And we couldn't agree more; it is because of this inexplicable charm and undeniable, unspoken synergy that makes it a treat to watch. Which is why we aren't surprised that they have won the public poll of the best jodi! That's right, the result of the #BLBestof6 is here and the janta has spoken and how!

If you need a little reminder, Salman Khan and Katrina Kaif were up against all the crackling pairs like Shahid Kapoor-Kiara Advani from Kabir Singh, Anil Kapoor-Madhuri Dixit from Total Dhamaal or Ranveer Singh-Alia Bhatt from Gully Boy but even then Salman Khan and Katrina Kaif fans thronged to the poll and made themselves heard. And hey, after Chashni, we are not surprised why. So much so that, they won the poll and how! Well, see for yourself. 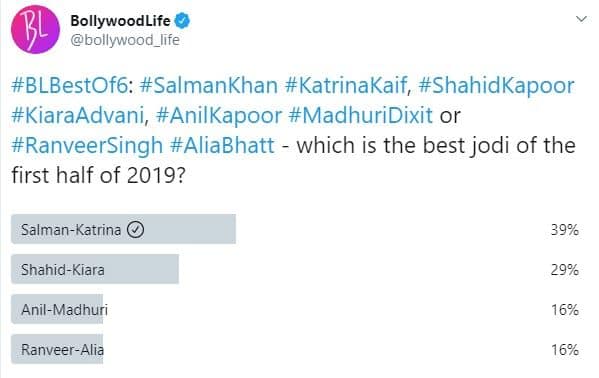 Salman Khan and Katrina Kaif are one of the most loved couples of B-town. Fans love their chemistry on and off-screen. Sallu and Kat collaborated for Ali Abbas Zafar's Bharat, which released on the occasion of Eid and broke several records. Salman and Katrina are pure magic on the silver screen. Guess that explains it all and the 39 percent of votes they managed to garner.

Though Shahid and Kiara were paired for a recreational track, Urvashi, Kabir Singh is their first full-length film as leads. Kabir Singh has been and still is a rage in India and its fever has gripped one and all. Kabir's obsessive love and Preeti's innocent emotions are superbly depicted in the movie. Sasha and Kiara's chemistry was charming. Which is why the duo stands at the second position with 29 percent of the total votes.

Comic caper, Total Dhamaal was full of funny gigs, but Anil Kapoor and Madhuri Dixit's Tom and Jerry like equation was the best. Especially the courtroom scene, they totally owned the show. We have witnessed their amazing chemistry in the past and Anil-Madhuri can surely give the newer jodis a run for their money! And mind you, they did by winning the #BLBestof3 best jodi poll earlier. This time around however, they could only get 16 percent of votes in the third position.

Zoya Akhtar's Gully Boy, which starred Ranveer Singh and Alia Bhatt as Murad Ahmed and Safeena Firdausi, was hugely entertaining, mostly because of the chemistry between the leads and Ranveer Singh, of course. But they fell short of a little but not a lot because they are also in the third spot with 16 percent votes.

So, did your fave jodi win? Let us know, tweet to us @bollywood_life!