Alia Bhatt celebrates her birthday with most important women in her life-Neetu Kapoor, Soni Razdan and Shaheen Bhatt — view pic

Alia Bhatt took to her gram and shared a group picture which includes Soni Razdan, Neetu Kapoor, Shaheen Bhatt and others. The actress called them 'the most important women in her life'.

It was Alia Bhatt's birthday yesterday and the Highway actress celebrated her special day with her loved ones. The night before, that is, on Sunday night, Karan Johar threw a huge party at his residence for his favourite student. Almost everyone from the Hindi film industry had joined the celebrations. Alia Bhatt who had just returned from her friend's wedding partied the night away with her loved ones such as Deepika Padukone, Arjun Kapoor, Malaika Arora, Ranveer Singh, Shashank Khaitan, Aryan Khan, Aditya Roy Kapur, Ayan Mukerji to name a few. The actress received some warm wishes on her special day from her loved ones. However, Neetu Kapoor's wish takes the cake. Last night, Alia cut the cake with some important women in her life and that includes her mon-Soni Razdan, sister-Shaheen Bhatt, Neetu Kapoor and others. "The most important women in my life," Alia wrote while Neetu Kapoor captioned the post saying, "Some happy moments shared with some very happy special people." Have a dekko at Alia's IG story and Neetu Kapoor's post here: Also Read - Take inspiration from Katrina Kaif, Alia Bhatt, Hina Khan and other celebrity actresses and look your best on Eid 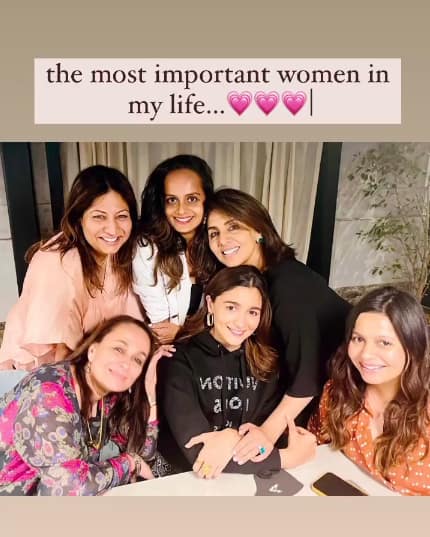 Alia Bhatt also thanked her fans for their wishes in a stunning post. She is seen wearing a shimmery black top with a red bow. She wrote, "thank you.. for it all.. the love & the light." Have a dekko at her post here: Also Read - Say what! Shah Rukh Khan to reunite with Sanjay Leela Bhansali for THIS film?

Meanwhile, Alia's beau actor Ranbir Kapoor is down with COVID-19. Neetu Kapoor had confirmed the news. And the Barfi actor was a part of Alia Bhatt's birthday celebrations too but via a video call. A source close to the actress told BollywoodLife.com that Ranbir and Karan planned the party night for Alia together. "Even though Alia had no plans to celebrate, Ranbir Kapoor and Karan Johar wanted it to be special and they put the plan in place. Ranbir had plans for a special Valentine’s Day weekend with the actress, but had to can it following uncle Rajiv Kapoor’s demise. He wanted to make it up for the lost opportunity on her birthday. But fate had other plans. He is in home quarantine after testing Covid positive. So Karan, the best host ever, came to the rescue and hosted the party at his house on Sunday night," the source revealed. Talking about his COVID-19 diagnosis, Neetu Kapoor had shared a picture of Ranbir and wrote, "Thank you for your concern and your good wishes. Ranbir has tested positive for Covid-19. He is on medication and recovering well. He is in self-quarantine at home and following all precautions."