Celebrity couple Anushka Sharma and Virat Kohli welcomed a baby girl, Vamika on 11th January 2021. Soon after Vamika was born Virat Kohli, who is also an Indian Skipper had to report to duty. But the handsome hunk-turned father did not wish to part with his daughter. Hence, Anushka Sharma and Vamika have been accompanying him for his matches across the country. It was reported that Anushka had taken a private jet and had requested the paparazzi to not take her and Vamika's pictures as they were spotted at the airport. Currently, Virat Kohli, Anushka and Vamika have been staying in Ahmedabad's Hyatt Regency wherein the former has been playing against England. Now, the hotel's management team made not only the players but also their families feel welcome by sweet gestures. Vamika, who happens to be the youngest got a specialised nameplate for her room in which she had been staying. The nameplate read "Home Sweet Home," followed by Vamika, Anushka and Virat's name. Have a dekko at the nameplate here: Also Read - Kareena Kapoor Khan, Alia Bhatt, Deepika Padukone and other Bollywood divas who made eyes pop with their OOPS moments 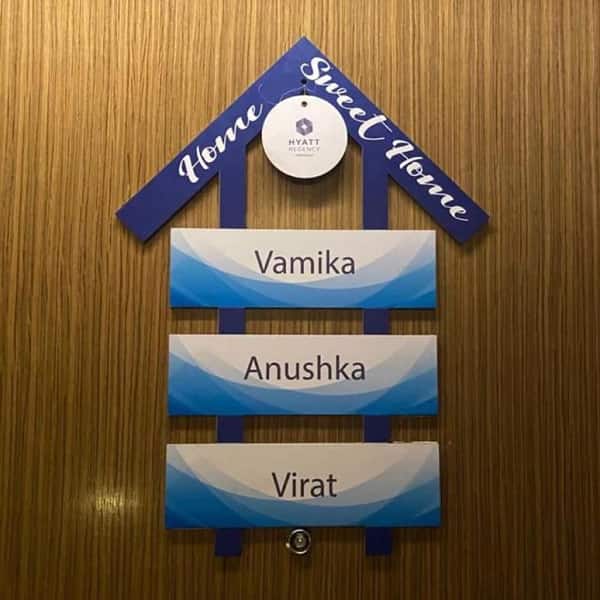 Also Read - Before Kartik Aaryan in Dhamaka, here are 11 actors who played journalists on screen

Isn't that a sweet gesture? Also Read - Anushka Sharma shares a glimpse of Vamika with Virat Kohli in her latest post and we bet you'll fall in love – view pic

Meanwhile, on March 8th, Women's Day, Virat Kohli penned a heartfelt note for Anushka Sharma. He shared the cutest picture of Vamika with Anushka and wrote, "Seeing the birth of a child is the most spine chilling, unbelievable and amazing experience a human being can have. After witnessing that, you understand the true strength and divinity of women and why God created life inside them. It's because they are way stronger than us men. Happy Women's Day to the most fiercely, compassionate, and strong woman of my life and to the one who's going to grow up to be like her mother. And also, a Happy Women’s Day to all the amazing women of the world." Have a dekko at his post here:

What do you have to say about this? Let us know your thoughts by tweeting @bollywood_life.