Ayushmann Khurrana extends support to his Badhaai Ho costar, Surekha Sikri, after she suffers a brain stroke; says, 'Always with you'

Some hospital personnel where Surekha Sikri has been admitted havve also revealed that she has been diagnosed with accumulation of fluid in the lungs and apart from that, her response to stimuli has not been up to the desired level Triple National-Award-winning actress Surekha Sikri, commonly known to today's generation for her role in Badhaai, Ho, recently suffered a brain stroke and has been declared critical by hospital personnel where she has been admitted after they revealed that she isn't responding well to treatment. Some staff members of the hospital also told ETimes that the actress has even been diagnosed with accumulation of fluid in the lungs and apart from that, her response to stimuli has not been up to the desired level. “The clot (developed due to the stroke) will have to be removed by medicines (thinners),” revealed the hospital staff. Also Read - Kundali Bhagya's Dheeraj Dhoopar, Anupamaa's Aneri Vajani to make a comeback? A look at stars who QUIT TV shows mid-way and returned

Naturally, an outpouring of concern gushed from Surekha Sikri's friends in Bollywood, with her Badhaai her costar, Ayushmann Khurrana, being among the first to send his best wishes. Taking to his Instagram stories, the National-Award-winning actor shared a cute picture from their film and wrote: “Wish you a speedy recovery ma’am. Always with you.” Check out his post below: Also Read - From Puneeth Rajkumar to Sidharth Shukla: 21 Film and TV celebs who passed away in 2021 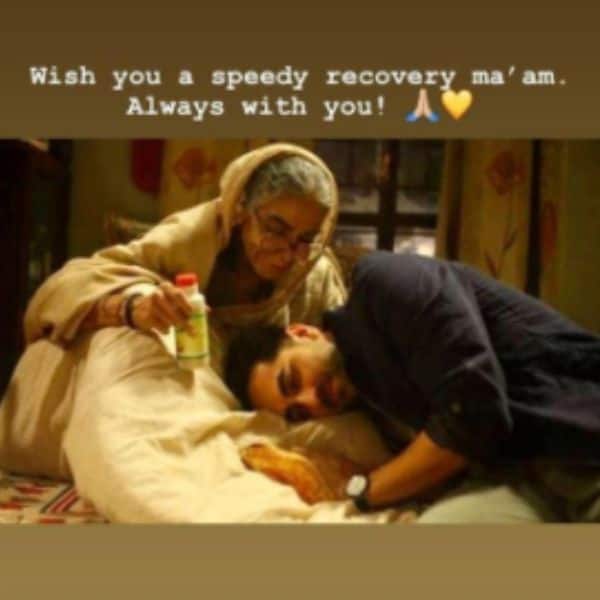 Going by Ayushmann's caption, a source close to Surekha Sikri revealed, “Surekha ji is in financial need and there is a lot of support coming in for her. Ayushmann has also pledged to support Surekha ji. We are praying for a full recovery of this brilliant human being and actor.” However, the actress' manager, Vivek Sidhwani, debunked the theory that she is in any need of financial assistance. “That was incorrectly put out in the press. Surekhaji has her own finances and the family, including her son, is by her side. There is no need for financial assistance for now. Many of her well-wishers, colleagues and filmmakers were kind enough to offer financial assistance. They have been informed that the family is taking care of everything and giving her the best possible treatment. We would like to acknowledge everyone who reached out to us,” he said.

It seems like all those who reached out to Surekhaji, including Ayushmann, Gajraj Rao and Sonu Sood, will be extending their support in other ways rather than financially.