Ayan Mukerji's Yeh Jawaani Hai Deewani was one of the most anticipated films of the year since it was had Deepika Padukone and Ranbir Kapoor collaborating for the first time after their break-up.

Deepika Padukone, Ranbir Kapoor, Kalki Koechlin and Aditya Roy Kapur won several hearts with Ayan Mukerji's Yeh Jawaani Hai Deewani. In the coming two years, the film will complete a decade. It's really hard to believe that almost 8 years have passed since Yeh Jawaani Hai Deewani hit the silver screens. It was one of the most anticipated films of the year since it was had Deepika Padukone and Ranbir Kapoor collaborating for the first time after their break-up. All the four characters, be it Bunny, Naina, Aditi or Avi, became immensely popular after the release. And they are still remembered for their reliability. Recently, a young student asked for Naina Talwar. Seems like the student did not want to write her exams and hence, had taken to social media and commented on one of Netflix's post asking for Naina Talwar to write exams on her behalf. Netflix shared the comment on their stories and tagged Deepika Padukone asking, "Can anybody help us to get in touch with Naina so we can make this happen?" Deepika was prompt to respond to the same. Have a dekko at the snapshot of the actress's Instagram story here: Also Read - Bollywood and Baarish: Romance, fights, chiffon sarees and more – here's what actors do when it rains and it's HILARIOUS – view pics 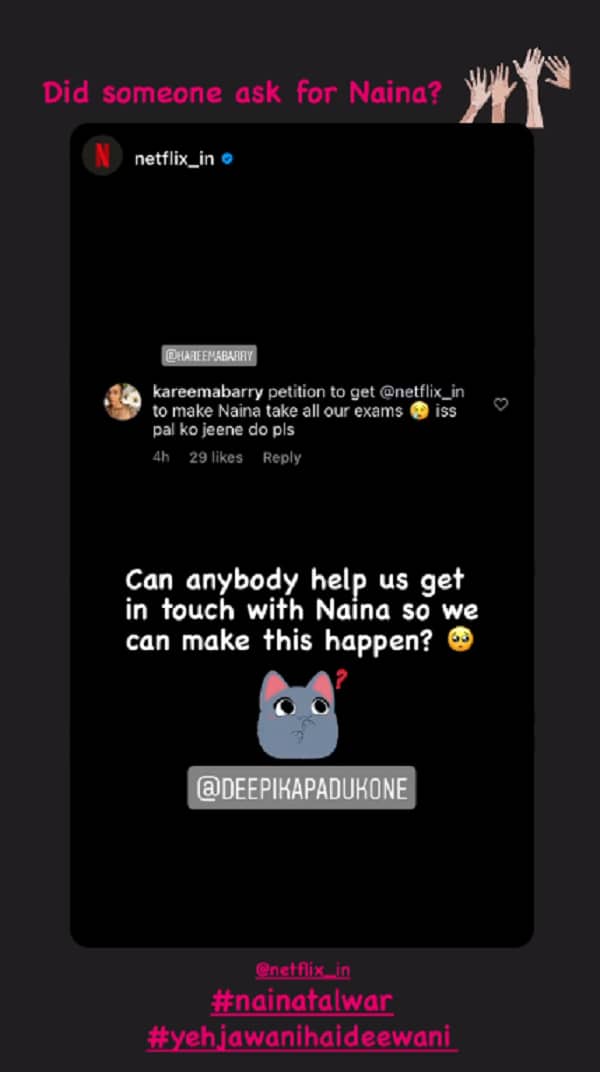 Also Read - From Ranbir Kapoor to Ranveer Singh: 7 actors who have some big projects lined up

Back in 2013, Yeh Jawaani Hai Deewani did a lifetime business of Rs 188.57 crore which was pretty huge. The film was a major box office success and went on to achieve cult status. Meanwhile, on the work front, Deepika is gearing up for 83's release. The Kabir Khan directed biographical-sport-drama film stars Ranveer Singh and an ensemble cast. It tells the tale of India's 1983 world cup win. Next, Deepika has a Shakun Batra film with Ananya Panday and Siddhant Chaturvedi. She also has Pathan alongside Salman Khan and Shah Rukh Khan. The actress will also be seen in the Hindi adaptation of The Intern.

What do you have to say about Deepika Padukone’s IG story? Do you miss Naina? Let us know your thoughts by tweeting @bollywood_life.