A Wednesday actor Naseeruddin Shah was admitted to a hospital after he was diagnosed with pneumonia. Almost after a week of being in the hospital, he has now been discharged.

All the fans of Naseeruddin Shah got worried as the reports of his hospitalisation hit headlines. It was reported that the the senior actor has been diagnosed with pneumonia. Reportedly, he had a small patch on his lungs. Now, his fans can heave a sigh of relief as he has been discharged from the hospital. After being in the hospital for a week, Naseeruddin Shah is all fine and back home. His pictures were shared by his son Vivaan Shah on social media. Also Read - #TheDirtyPicture: 9 memorable dialogues from Vidya Balan's cult classic that spell entertainment, entertainment, entertainment — view pics

As Naseeruddin Shah returned home, Vivaan Shah shared two pictures on social media assuring his fans that everything is fine. One of the pictures see the A Wednesday actor conversing with wife his Ratna Pathak Shah. One of the captions on his story read, "He just got discharged today morning." The actor does appear frail in the pictures after a week's hospitalisation but his fans are more than happy that he is back home, all healthy and fine. Earlier, to a news agency, Ratna Pathak Shah had given his health update saying, "He is perfectly alright. There is a minor patch on his lung, which they have been treating. He should be discharged by tomorrow hopefully." Take a look at the pictures below: 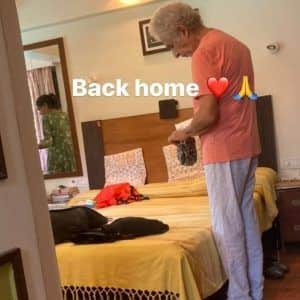 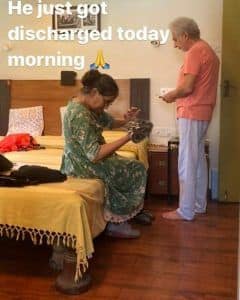 On the work front, the Ishqiya actor will next be seen in a film called Maarrich. It is directed by debutant Dhruv Lather. Maarrich also features Tusshar Kapoor, Anita Hassanandani, Rahul Dev and South actress Seerat Kapoor. Shah will also feature alongside Rasika Dugal in the upcoming film The Miniaturist Of Junagadh. Also Read - Tanisha Mukerji, Abhishek Bachchan and 7 other actors who couldn't make it in Bollywood despite hailing from superstar parents

Naseeruddin Shah has a very impressive filmography. He has films like Masoom, Mohra, Jaane Bhi Do Yaaron, Tridev, Sarfarosh, The Dirty Picture and many more registered in his name.