Fatima Sana Shaikh wrote on Instagram, 'I have tested positive for COVID-19 and currently following all the precautions and protocols and have been home quarantining myself.'

Dangal actress Fatima Sana Shaikh on Monday said she has tested positive for COVID-19 and is under home quarantine. The actress took to Instagram and wrote, “I have tested positive for COVID-19 and currently following all the precautions and protocols and have been home quarantining myself. Thank you for all your wishes and concerns. Please stay safe guys.” Have a look at what she posted below: Also Read - Aamir Khan gets trolled for new firecrackers ad; BJP MP claims it's creating 'unrest among the Hindus' 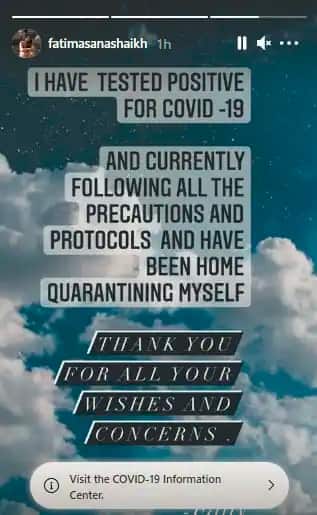 Fatima was a part of Ludu and Thugs Of Hindostan. In a past interview to IANS, the actress had said, “I am getting work, in spite of people not seen much of my work. Which means people have a certain amount of confidence in me. The success of the film is never in our hands but our performance is. If people like it, you will get work. So I am trying hard to deliver my best. Also, more than anybody putting pressure on us, we put pressure on ourselves.”

Talking about Thugs Of Hindostan, which bombed at the box office, she had said. “It's true that I thought that a lot of things will happen once 'Thugs Of Hindostan' (released) but that did not happen. What should we do? I cannot deprive myself of the fun that I had shooting the film, working with the best talents of our country and one of the biggest production houses of Bollywood. I am happy about all that and then, one has to move on!”