#HappyBirthdayRanveerSingh: Anisha Padukone's wish for 'jija ji' is too cute for words

Ranveer Singh will be next seen in Kabir Khan's '83, which also stars Deepika Padukone, Tahir Raj Bhasin, Pankaj Tripathi and others in pivotal roles.

The handsome hunk and live-wire of Bollywood, Ranveer Singh has turned 35 today. And while we are waiting for wifey and actress Deepika Padukone's adorable post, her younger sister Anisha Padukone wished the Padmaavat actor in a cute yet film style as she shared a gif featuring Ranveer on her Insta story and wrote, "Janam din ki hardik shubhkamnaye jija ji (Happy birthday, brother-in-law)." Also Read - When Deepika Padukone spoke up openly about Ranbir Kapoor's infidelity, called herself 'foolish' for trusting him 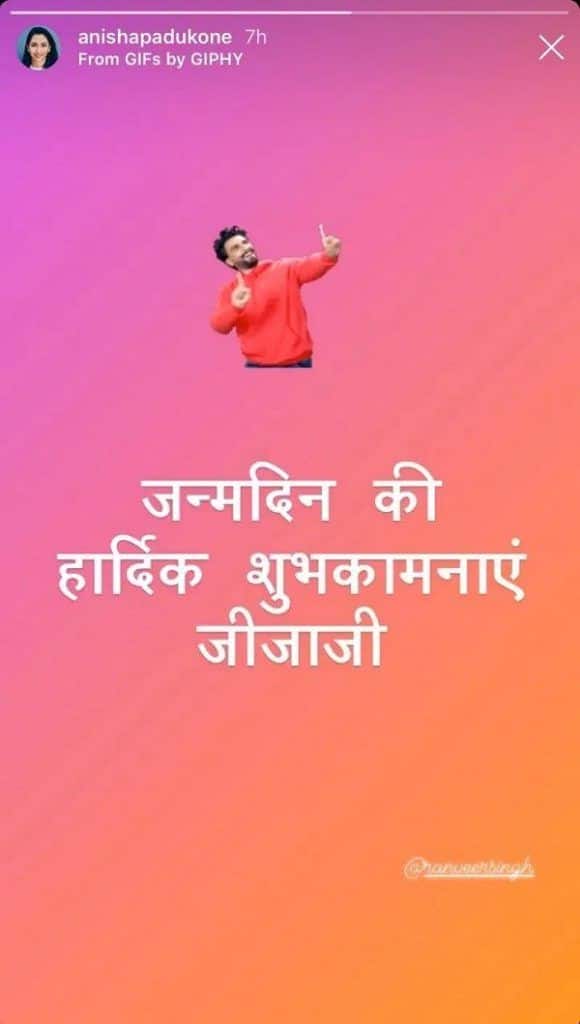 Interestingly, Ranveer's Lootera completed 7 years of release yesterday and the actor posted a video on that. Wifey Deepika Padukone wrote, "One of your best performances!" Also Read - Sooryavanshi, Satyameva Jayate 2, '83 and more: Which of these 2021 releases are you most excited for? Vote now

On the work front, Ranveer Singh will be next seen in Kabir Khan's '83, which also stars Deepika Padukone, Tahir Raj Bhasin, Pankaj Tripathi and others in pivotal roles. Talking about the Deepika coming on board, director Kabir Khan earlier told us in an exclusive interview, "I think the background, the fact that her dad, Prakash Padukone was a sports superstar, that influenced her very strongly. It wasn't because Deepika had agreed to do the film that I wrote the role. Deepika liked the role, and that's why she agreed to do the film. We never initially intended it that way (Deepika being a part of the film), and as Deepika said, there's a certain support role that the family plays, and I wanted to capture that, which is why I wrote the character of Romi, and when I narrated it to Deepika, I knew it was a small role. So, I said to Deepika, 'Just listen to the film. If you like it, you'll come on board, if not, you won't come on board. She heard the film, and she knew it was about the team and the boys and Kapil. But, she just loved the script and so, she came on board." So, are you excited for this sports drama? Tweet and let us know @bollywood_life.