Is Sonam Kapoor pregnant? Netizens raise questions over her latest video as she returns home after over a year

After several months, Sonam Kapoor returned to India from London. As she got spotted at the airport, netizens wondered if she was pregnant.

Sonam Kapoor has been away from home for months. She was in London along with husband Anand Ahuja. Given the Coronavirus situation in India and abroad, the actress could not travel frequently. Finally, after several months, she returned to India. She was spotted at the Mumbai airport. Her father Anil Kapoor personally came to receive her and we got to see a sweet father-daughter moment between the two as they met after several months. However, as the video of her exiting the airport went viral, netizens started questioning if she was pregnant. Also Read - Deepika Padukone, Alia Bhatt, Kareena Kapoor Khan and 7 more Bollywood beauties who left their education mid-way for a career in Bollywood

On Instagram, a lot of netizens questioned if she was expecting her first child. She was wearing a blue chequered dress with a dark blue peplum style jacket. "I think she’s pregnant" wrote one while another one wrote, "She's pregnant it seems." Some even congratulated her for being pregnant. Check out Sonam Kapoor's video below: Also Read - Salman Khan, Katrina Kaif, Akshay Kumar and more – know how Bollywood biggies are prepping for their upcoming films post lockdown 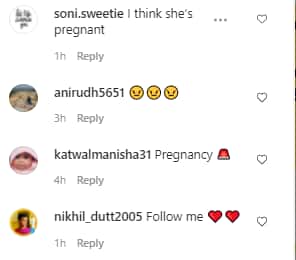 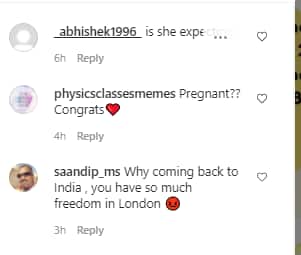 Well, this is not for the first time that netizens have guessed Sonam's pregnancy but until the actress reveals it herself, one can't say!

It was in 2018 that Sonam Kapoor and Anand Ahuja tied the knot in a traditional ceremony. They had a Hindu wedding at home, which was followed by a grand reception. The reception was attended by the whos who of the industry including Salman Khan, Shah Rukh Khan, Alia Bhatt, Ranbir Kapoor, The Ambanis, Kareena Kapoor Khan, and many others.

The actress who made her Bollywood debut with Saawariya was last seen in The Zoya Factor that released in 2019. Since then, she hasn't announced any film. Reportedly, her sister Rhea Kapoor is planning the second instalment of The Veere Di Wedding. The first one starred Kareena Kapoor Khan, Sonam Kapoor, Swara Bhasker and Shikha Talsania. We are waiting for the announcement!