The loose outfit that Sonam Kapoor wore on her return to Mumbai sparked pregnancy rumours. The actress has now responded to the rumours in her own inimitable style.

Sonam Kapoor recently returned to Mumbai from London. The loose outfit that she wore on her return to Mumbai sparked pregnancy rumours. The actress has now responded to the rumours in her own inimitable style. She shared a boomerang video in which she was seen holding a hot cup of tea. She wrote, “Hot water bottle and ginger tea for first day of my period…” Well, all the pregnancy rumours have been put to rest for now. Have a look at her post below: 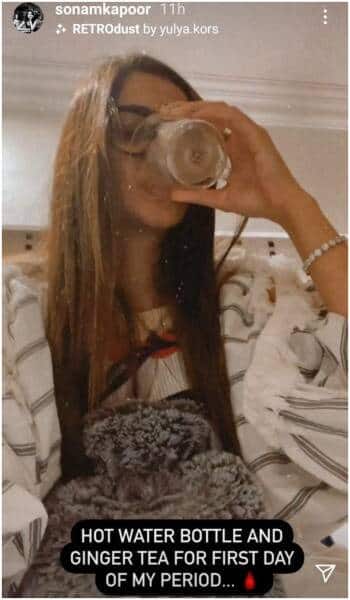 This is not the first time that pregnancy rumours of Sonam have cropped up. Sonam married Anand Ahuja in 2018. They had a Hindu wedding at home, which was followed by a grand reception. The reception was attended by the whos who of the industry including Salman Khan, Shah Rukh Khan, Alia Bhatt, Ranbir Kapoor, The Ambanis, Kareena Kapoor Khan, and many others. Also Read - Deepika Padukone, Kareena Kapoor Khan, Anushka Sharma and more Bollywood beauties who went a little OTT with dramatic sleeves – view pics

The actress recently shot for the cover of Vogue. In her interview with the magazine, she addressed the pay disparity in the Hindi film industry. "The pay gap is ridiculous," Sonam Kapoor told Vogue. She added that there's still a long way for the gap to be filled. She said, "It’s not changed at all. I can stand up to it, but then I don’t get those roles, and I’m ok with that. And frankly, I can afford to do that. I realised over the past two or three years that I have no right to judge anybody. I’m very privileged, so making difficult choices isn’t really f*cking difficult. I’d better be making those choices." Also Read - From Deepika Padukone to Jacqueline Fernandez: B-Town beauties who took the internet by storm by posing topless in photoshoots