Kangana Ranaut reveals her Instagram account is HACKED after her posts on Talibanis; calls it a ‘big international conspiracy'

Kangana Ranaut took to Instagram to inform about ‘suspicious activity’ going on with her Instagram account. According to the actress, someone in China had tried to access her account, which later got disabled. She added that her posts about Taliban’s occupation in Afghanistan had also disappeared. The actress revealed that she had to access her own account through her sister, Rangoli Chandel’s cell-phone. Kangana has been posting regularly about Talibani occupation of Afghanistan and criticizing it. Also Read - Did you know Queen Kangana Ranaut REJECTED these Bollywood films starring Salman Khan, Akshay Kumar, Ranbir Kapoor and more? Here's why

Her post read, “Last night I got Instagram alert as someone tried to hack my account in China, the alert disappeared suddenly, and this morning all my stories about Talibanis has disappeared. My account was disabled. After calling Instagram people I could access it, but as I try to write I am getting logged out of my account again and again." Also Read - ZEEL-Sony merger: Kangana Ranaut congratulates Punit Goenka; says, ‘Punit sir is the most genuine, humble person I ever worked with’ 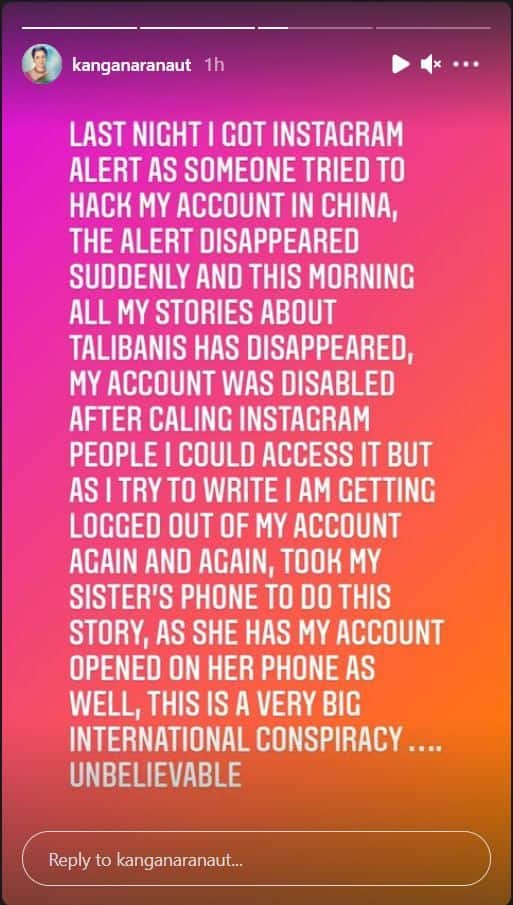 She added, “Took my sister’s phone to do this story, as she has my account opened on her phone as well. This is a very big international conspiracy… Unbelievable."

It can be recalled that in March, Kangana’s verified Twitter account was permanently suspended by Twitter. She had urged PM Narendra Modi to ‘tame’ Mamata Banerjee. A Twitter spokesperson told NDTV, “We prohibit content that wishes, hopes or expresses a desire for death, serious bodily harm against an individual or group of people and take enforcement action when we identify violations which could include placing an account in read-only mode."

After the ban, she had said that she is waiting to be banned from Instagram, claiming it ‘would be a badge of honour’ for her. She took to Instagram stories and wrote, "On Instagram everybody is a victim of capitalism, an entire generation of youth eaten up by the termite of capitalism and consumerism their indifference and disdain for the nation and its crisis is appalling, lack of human values, empathy and nationalism makes them ugly shallow and useless."

On the work front, Kangana will be next be seen in Thalaivi.