After Karan Patel took a jibe at Kangana Ranaut for her oxygen comment on social media, her sister Rangoli Chandel slammed him calling the TV actor nalla and bojh.

Bollywood actress Kangana Ranaut, who always grabbed headlines for her bold and controversial statements on social media, recently faced the consequences of that as her Twitter account got suspended after she tweeted about the recent assembly elections. Before that popular TV actor Karan Patel took a jibe at the Manikarnika actress for her comment of forcefully taking oxygen from the environment during COVID-19 times as he shared the screenshot of her tweet on her insta story and wrote, “This woman is the most hilarious stand up comedian this country ever produced.” Also Read - What to watch today on Zee5, Amazon Prime Video, Netflix, Disney+: Silver Skates, Loki Episode 2, Dolemite is my Name, Mard ko Dard Nahi Hota and more 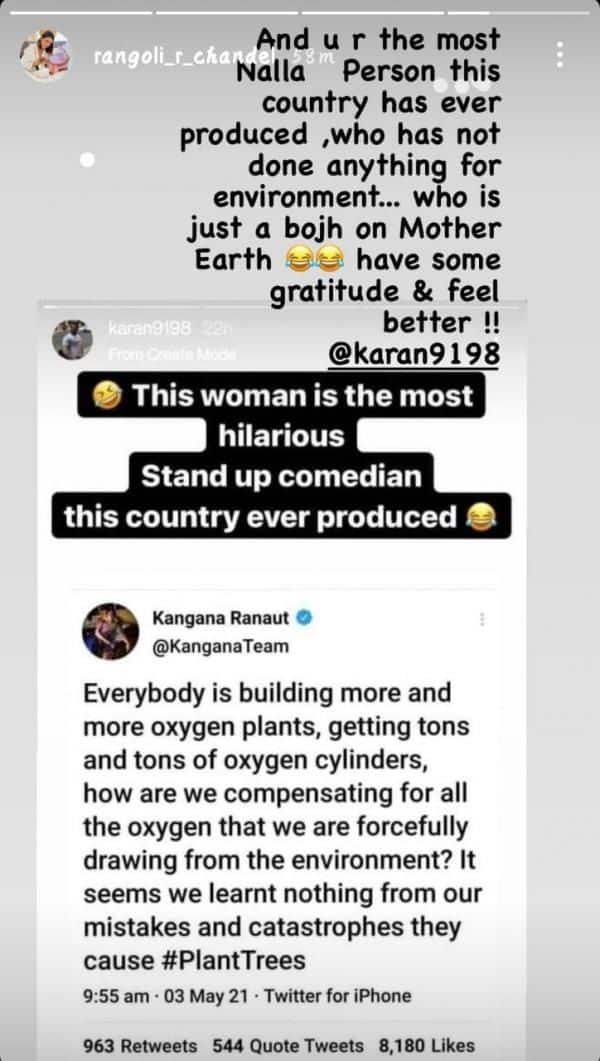 Also Read - What to watch today on Zee5, Amazon Prime Video and Netflix: The Republic of Sarah, The Expanse, Forbidden Love and more

Well, these words from the TV actor didn't go well with Kangana's sister, who bashed Karan and wrote, “And you are the most Nalla person this country has ever produced, who has not done anything for environment… who is just a bojh on Mother Earth. Have some gratitude and feel better! @karan9198.” Also Read - Richa Chadha, Swara Bhasker, Hansal Mehta and other celebs REACT to Kangana Ranaut's Twitter account suspension

Talking about the suspension of her Twitter account, Kangana Ranaut recently shared a statement, which reads, “Twitter has only proved my point they are Americans and by birth, a white person feels entitled to enslave a brown person, they want to tell you what to think, speak or do, fortunately, I have many platforms I can use to raise my voice including my own art in the form of cinema but my heart goes out to the people of this nation who have been tortured, enslaved and censored for thousands of years and still there is no end to the suffering”.

Many Bollywood celebs like celebs like Richa Chadha, Swara Bhasker, Hansal Mehta, Gulshan Devaiah, Kubbra Sait and others gave a positive reaction of Kangana Ranaut's Twitter account suspension. Meanwhile the actress will be next seen in Thalaivi, which also stars Arvind Swami and Madhoo in pivotal roles. The film is directed by AL Vijay and written by K. V. Vijayendra Prasad.