Veere Di Wedding starring Kareena Kapoor Khan, Sonam Kapoor, Swara Bhasker and Shikha Talsania was one of the biggest hits of 2018. The film produced by Rhea Kapoor received appreciation from all corners as it narrated the story of four best friends and how they stood by each other in thick and thin. A light-hearted film with many cool moments made Veere Di Wedding a favorite of millennials. It has been three years since its release and here's what Kareena has to say about the film. Also Read - Trending Entertainment News Today: Hrithik Roshan's Krrish 4 returns, Kareena Kapoor Khan-Taimur's movie date, Sonu Sood sells bread-eggs and more

On her Insta stories, she reshared a post made by Rhea Kapoor and wrote, "the best decision I took. Such a cool film #3YEARSOFVEEREDIWEDDING'. Rhea shared several pictures on Instagram depicting the characters of the stars. The picture had "No guts no glory! Veere's for Life" written on it. She shared it with the caption, "Happy 3 @vdwthefilm you set me free." Swara Bhasker too reacted to the film completing three years and wrote, "So grateful to have been a part of this bomb piece of badassery that only some amazing women, and very cool elevated men could have made!" Further adding, "3 YEARS (June 01) to the birth of an obsession - my nafrati chintus obsession with my fingers! Happy 3rd to the film that gave rise to an economy: the two rupees per tweet employment guarantee scheme that it seems i launched for my trolls." Also Read - From attempting suicide to hacking accounts: 7 times Bollywood fans took their fandom to a new crazy level! 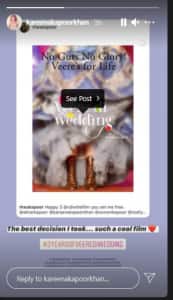 While Veere Di Wedding was a smashing hit, fans are now looking forward to its sequel. It was in 2018 only that Rhea had confirmed the second part of the film. She was quoted saying, "I think it’s gonna happen actually. It might happen sooner than I thought it would happen. But things look good. I am excited." Later, it was reported that Veere Di Wedding will go on floors after Kareena Kapoor Khan's second pregnancy.