Kiara Advani shares a romantic picture with Sidharth Malhotra on his birthday; Is their relationship Insta official?

Kiara Advani and Sidharth Malhotra are rumoured to be in a relationship. On his birthday, Kiara dropped a romantic picture with him.

Sidhatrth Malhotra turns 37 today. On the occasion of his birthday, his rumoured girlfriend Kiara Advani to share a romantic picture of theirs from Shershaah. In the picture, the birthday boy can be seen wrapping his arms around Kiara. Along with the picture, Kiara wrote, "Happy happy birthday dearest one" followed by a heart emoji. She also tagged him in the post. Both of them are rumoured to be in a relationship. Looking at the pic, it seems Kiara has made it Insta official. Have a look: Also Read - Bhool Bhulaiyaa 2 star Kartik Aaryan's mashup chat with a baby to promote his film impresses fans; netizens claim, 'Died laughing' 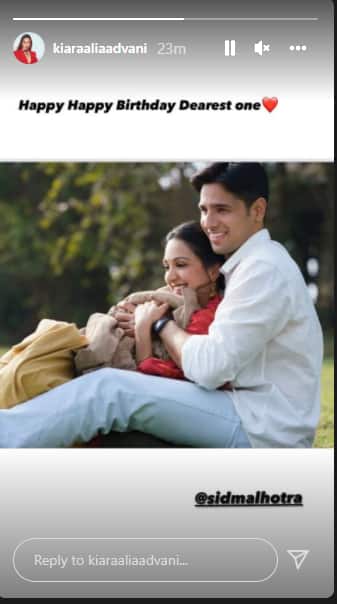 In a past interview with ETimes Kiara had said that she considers Sidharth as one of her 'closest' friends from the industry. She had added that as a co-star, Sidharth is extremely driven and focused. She went on to say that he loves to prep a lot and does a lot of readings. She stated that it was ‘very similar’ to the way she likes to work on a film. “So, in that sense, we got along very well. As a friend, I’d say he is one of my closest friends in the industry. I think, even as a friend, he’s full of life and always fun to be around," Kiara had said. Also Read - Katrina Kaif wishes hubby Vicky Kaushal on his birthday, 'YOU make everything better'; his REPLY will win your hearts

In an interview with BollywoodLife, Shershaah director Vishnuvardhan was asked whether Sidharth Malhotra and Kiara Advani are indeed in a relationship. He had said that it’s didn't even matter to him while he was filming. “It is not about Kiara Advani and Sidharth Malhotra, for me it is Captain Vikram Batra and Dimple (Dimple Cheema, his real-life love interest); they were playing the characters. For me, it didn't matter – just because they're in a real-life something or whatever is happening, it's their personal life, it's not going to help me for the film. What really worked for me, if you see the trailer carefully, it's the way Sidharth Malhotra and Kiara Advani looked, their pairing is actually fresh – that's what actually worked because they're very close to the characters.”