Dilip Kumar passed away on July 7 due to a prolonged illness. The paps covered his funeral unabatedly.

Kriti Sanon has come down heavily on paps who covered Dilip Kumar’s funeral. The actor passed away on July 7 due to a prolonged illness. Also Read - Mega Clashes: Akshay Kumar's Sooryavanshi, Ranveer Singh's '83 and other 5 films to lock horns with THESE biggies at the box office

Kriti recently told ETimes, “I was angry when I saw those videos. It was horrible.” She said that there is no need cover funerals as it’s a very personal thing. “If tomorrow, you're going through a loss, your family would not want it to flash everywhere. And why do people want to see that part of it, let it be private. Even if you are covering, why are you talking behind the camera, mute it. They were talking so badly, laughing about not getting the angle, shouting each other to get aside. It was really bad to see that. It is very insensitive," Kriti stated. Also Read - Sooryavanshi, Satyameva Jayate 2, '83 and more: Which of these 2021 releases are you most excited for? Vote now

She added that while she knows there is a demand for information constantly, it doesn't mean that we leave our sensitivity and our human side and just do anything and everything. “So it made me very angry at that time, it was an impulsive post and I do stick by it. I don't have any idea if any change will happen or has happened because of that or not. I just felt like voicing it and that's what I did," the Mimi actress said. Also Read - BIG CLASH! Prabhas' magnum opus Adipurush to lock horns with THIS Akshay Kumar starrer at the box office

She had even posted on Instagram stories about celeb funerals. 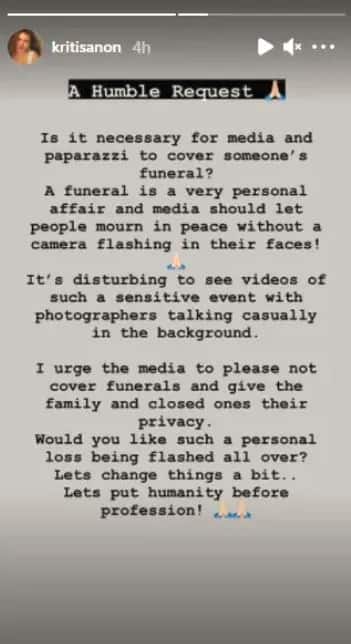 On the work front, Kriti is seen in Mimi which also stars Pankaj Tripathi and Sai Tamhankar. She also has Bachchan Pandey in which she will be reuniting on the silver screen with Akshay Kumar. The film also stars Arshad Warsi and Jacqueline Fernandez. She will also be seen with her Heropanti co-star Tiger Shroff for an upcoming movie titled Ganapath.