Maanayata and daughter Iqra twinning has our hearts, but it's Sanjay Dutt's silver hair in THIS family pic that has us intrigued

In the picture, Sanjay Dutt can be seen hugging wife Maanayata from behind, with their daughter Iqra leaning into them, and another close family relative, plus their 2 pooches, sharing the frame

Maanayata Dutt recently took to her Instagram handle to treat Sanjay Dutt's fans with a picture-perfet family photo. Sanjay Dutt looked elated to be spending time with his wife Maanyata and daughter Iqra. In the picture, Sanjay Dutt can be seen hugging wife Maanayata from behind, with their daughter Iqra leaning into them, and another close family relative sharing the frame. The mother-daughter duo can be seem twinning in adorable pink night suits. The one thing that makes it a 'picture perfect' snap, are the two adorable furballs who seem to be playing with the family. Check it out below: Also Read - Ranbir Kapoor-Alia Bhatt, Gauri and Aryan Khan – Celebs who left India amid the second COVID-19 wave – view pics 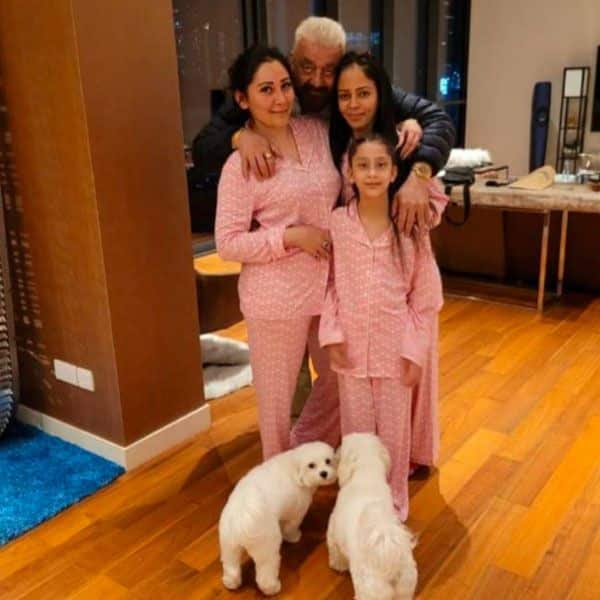 While we loved the close-knot family moment, and twinning between Maanyata Dutt and daughter Iqra as also the two pooches stealing our hearts. what has really caught our attention is the deadly Dutt's deadlier, new, silver hairdo, making us wonder if it's for an upcoming movie of his. Also Read - From Sushant Singh Rajput’s Manav to Hina Khan’s Akshara – 17 actors who left fans devastated by quitting TV shows – view pics

Adding fuel to our curiosity is another picture shared by Sanjay Dutt taking on a new avatar. He can be seen with a French beard and nicely trimmed hair. Putting on sunglasses and the ever present lal tilak, Sanjay Dutt looks to have dialer back the years with his look and his stylist can be seen spraying some kind of hair spray to give his hair an enhanced look. Here's the pic...

On the work front, Sanjay has quite a vast trajectory of films in his basket. With projects like, 'KGF Chapter 2', 'Prithiraaj', 'Shamsheraa' and 'Toolsidaas Junior', Baba is set to treat his fan on the big screen in the coming months.