Recalling her meeting with Mira Rajput, Neliima Azeem said, 'I met Mira and she was so sweet, young and full of enthusiasm, love and affection. I fell in love with her at first sight.'

Shahid Kapoor and Mira Rajput tied the knot in 2015. It was an arranged marriage. Mom Neliima Azeem has now revealed how the actor broke the news to her about being in love with Mira Rajput. While they are really close to each other, Neliima has said that the actor was actually quite shy. Also Read - Trending Entertainment News Today – Indian Idol 12: Anjali Gaikwad's elimination leads to fury amongst fans; Saaho actress Evelyn Sharma ties the knot

She told Bollywood Bubble, “He is like that, he is very careful and he was not sure how I would react to it, but I got very excited.” She added that Shahid showed her Mira’s picture and after that, they met. Recalling her meeting Neliima said, “I met Mira and she was so sweet, young and full of enthusiasm, love and affection. I fell in love with her at first sight." Also Read - Shahid Kapoor and Mira Rajput's social media PDA will make you believe in old school romance - view pic

She added that Mira is very pretty and glamorous and beautiful. “Along with that, she is somebody who has just struck the balance in our family. She is such a good homemaker and companion. She is so sensible for her age, it is unbelievable how she has adjusted to a film actor’s life,” said Neliima. Also Read - Trending Entertainment News Today – When Pankaj Kapur revealed that he's uncomfortable using the term daughter-in-law for Mira Rajput; Kishwer Merchant recalls her casting couch experience

She also said that Mira is such a young mother and she is so good at everything. She went on to say that more than anything else, she is a very good friend and companion to Shahid.

Mira wished Neliima on Mother’s Day yesterday with a picture of them. “Happy Mother’s Day, mom. Your positivity and zest for life is so inspiring. And I love that we are always on the same side,” she wrote. 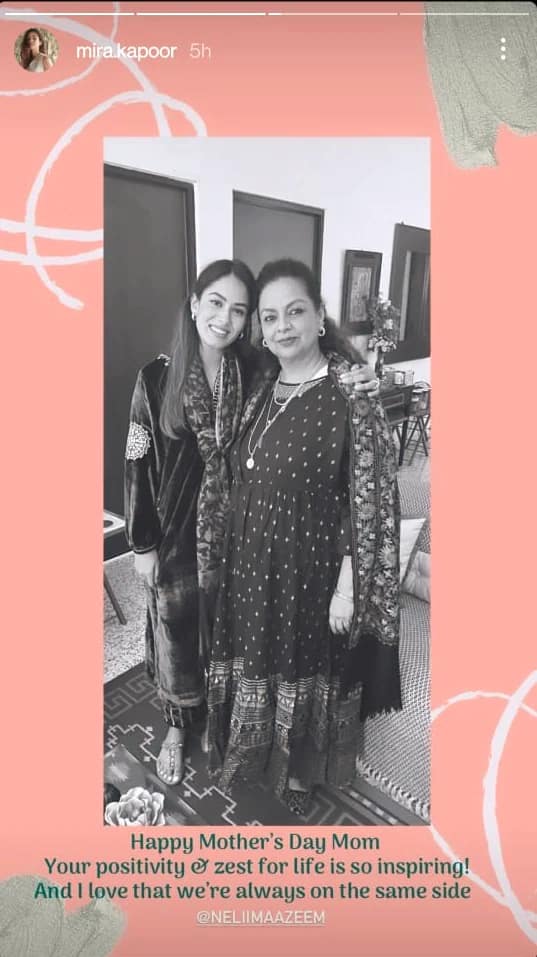 On the work front, Shahid will be seen next on the big screen in Jersey, a remake of the Telugu sports drama of the same name. The film also stars his father Pankaj Kapur and Mrunal Thakur. The actor will also be seen making his digital debut with a web series directed by Raj and DK. “I loved the story idea when I first heard it and since then it has been an exciting ride so far! Can’t wait to share this series with the audience,” he had said in a statement.