Have you seen Priyanka Chopra's latest pictures? If not you scroll down to have a dekko at it. Priyanka Chopra aced her denim jean look that left even her Krrish costar Hrithik Roshan and her The White Tiger costar Rajkummar Rao gushing. Check out their comments below:

Anything and everything Priyanka Chopra dons becomes a fashion statement. She is a risk-taker and would not hesitate to break mould and experiment when it comes to fashion. You may have seen her stunningly gorgeous red carpet looks be it at Cannes or the MET. That's how Priyanka Chopra is, being the best of herself in everything she does. Recently, Priyanka took to her social media handle and shared a couple of pictures in blue denim with heels and a white top. She could be seen sitting in a french styled section of the wall. Priyanka Chopra had left her curls loose on her shoulder. She looked gorgeous. So much so that her costars Hrithik Roshan and Rajkummar Rao couldn't stop gushing over her looks. But first, check out the Saath Khoon Maaf actress's post below: Also Read - Shah Rukh Khan, Kangana Ranaut, Saif Ali Khan and more Bollywood celebs who flaunted their love bites with pride – view pics

"Blue jean baby," Priyanka had captioned all three of her posts. Hrithik Roshan and Rajkummar Rao commented on her first picture. Priyanka's Krrish costar commented saying, "Kya Baat Hai," while her The White Tiger costar put feasting eyes emoticon and wrote her initials, "PC" alongside it. Check out their comments below: Also Read - From Kangana Ranaut to Urfi Javed: Actresses who committed fashion crimes in ridiculously bold and blah outfits – view pics 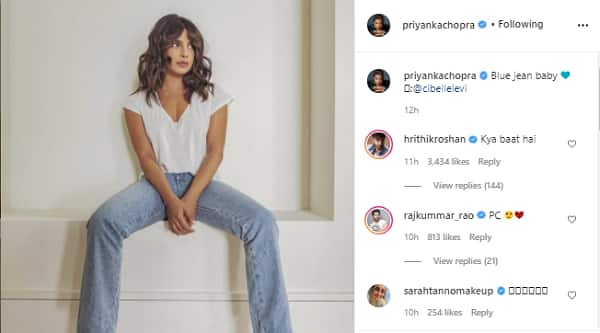 Check out her other two posts below:

Meanwhile, the actress opened up on her upbringing and her strong character. Priyanka Chopra said that her upbringing has played a crucial role in shaping her personality. "I am a product of traditional India and its ancient wisdom, and modern India and its urban bustle. My upbringing was always an amalgamation of the two Indias and, just as much, of East and West," she said, reported IANS.

The actress had also opened up on how she was not comfortable with the idea of getting married. "For a really long time, I was like, I don’t know. Being married was such an alien thought. But [now] I am so comfortable in it," the actress told People. "I loved the idea of being married, I was fascinated with the idea of being a bride when I was a child without realising what it really meant. But when I got in my 20s, I said I have got things to do, I didn’t know what it would have meant. When you find the right person, everything is so comfortable and not everything is the effort I thought it would be," she added.