Thanks to Raj Kundra's porn films case, Shilpa Shetty's name is also ruling the headlines. As per the reports, the actress was interrogated by the police in this case. There are several reports suggesting that Raj and Shilpa also had a showdown after he was taken home by the police when the raid was being conducted. Yesterday, Shilpa Shetty broke her silence and released a statement on Instagram. She received tremendous love and support from her friends and family including sister Shamita Shetty. Also Read - Ganesh Chaturthi: Shilpa Shetty celebrates Ganpati Visarjan with her family; makes a strong statement with her kids amidst the turmoil – view pics

On Shilpa Shetty's statement, sister Shamita Shetty dropped a comment saying, "I love u my munki and with you always through thick n thin .. always @theshilpashetty." Actor R Madhavan too dropped a comment saying, "You are one of the strongest people I know and I have complete faith that this challenge too you will overcome with grace and dignity. Our prayers always with you and your family." Mahhi Vij called her a woman with the most beautiful heart. Also Read - Trending Entertainment News Today – Shilpa Shetty gets brutally trolled for celebrating Ganpati, Jethalal memes trend after Raj Anadkat-Munmun Dutta's relationship rumours and more 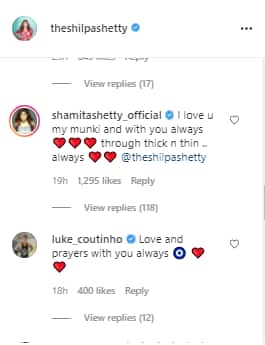 In the statement released by Shilpa Shetty, she requested all to respect her and her family's privacy in tough times. She also asserted that they do not deserve media trials and let the law take it course. She stated that she is a law-abiding citizen and she has full faith in Indian judiciary.

Raj Kundra was arrested on July 19 for his alleged involvement in a pornography-related case. He was charged for reportedly producing and distributing adult content through various channels. As per the reports, the Bombay High Court has reserved its order in a plea made by Raj Kundra challenging his arrest and seeking immediate release from Arthur Road Jail. Along with him, reportedly a few more people involved in the pornography distribution racket have also been arrested. Watch this space for more updates.