Sadak 2 has received a rating of 1, which is one of the lowest. The film is Mahesh Bhatt's directorial comeback and a sequel of his 1991 hit, Sadak.

Well, if we go by the audience rating on IMDb, Sadak 2 is a disaster. It has received a rating of 1, which is one of the lowest. The film is Mahesh Bhatt’s directorial comeback and a sequel of his 1991 hit, Sadak. Starring Alia Bhatt, Sanjay Dutt and Aditya Roy Kapur, the film got bad reviews as well. Our film critic Urmimala Banerjee gave it 1.5 stars and wrote, “The opening scene of the film is terrific. Sadly, the film starts faltering just after that. The highlight of Sadak was the character of Maharani. Here, Guruji, played by Makrand Deshpande looks like a comical hybrid between an Egyptian and Rastafarian priest.” She added, “With a good premise, it is sad to see how the writers turned it into a lethargic potboiler of a villainous father and a knight in shining armour.” Also Read - Alia Bhatt's latest ad questioning the age-old tradition of kanyadaan has unleashed a STORM on twitter 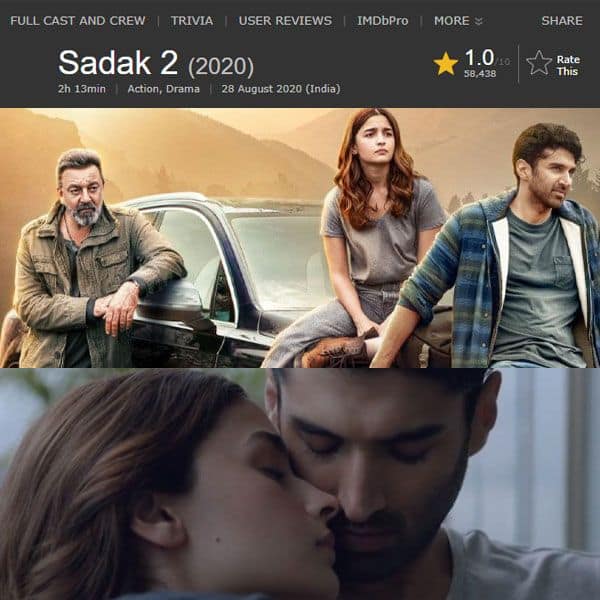 Sadak 2 has been getting negative response ever since the first look of the film was launched. On August 16, it was reported that the film's trailer had emerged the third most disliked video in the world and the most disliked YouTube video in India. Also Read - RRR, NTR 30 and more: Tollywood's Young Tiger Jr NTR's upcoming films promise to be pan-India blockbusters

Released on August 12, the trailer of Sadak 2 was trolled by many netizens as it was seen by people as a shining example of Bollywood nepotism — a topic that has become talk of the town after actor Sushant Singh Rajput's death on June 14.

Opening up on why the film is being targeted, filmmaker Prakash Jha told us, “I'm not on social media much, honestly. I've heard about this dislike and I don't know what sort of message it sends, but it's unfortunate. I also think it's probably the product of this depressing pandemic time when people are getting the opportunity to vent their feelings in abnormal ways. No one can deny that Alia Bhatt is a brilliant actress. I don't want to sit in judgment and say that she's a brilliant person, I've never met her, but as an actor, she is very good. As a director, Mahesh Bhatt is very good. I don't know if they've made a good or bad film, when the film comes, it'll be judged then. But the access to social media to be able to vent your feelings has created this atmosphere where people are immediately jumping to opinions and judgments and things like that and if this is what the world has come to be, if a small virus can bring the world to its knees, things like dislikes for a trailer hardly matter.”