Sanjay Dutt's daughter, Trishala Dutt was trolled by an Instagram user for wearing stylish clothes and venturing out despite being in lockdown. She gave a befitting reply to the troll before switching to a private profile.

Often star kids are being trolled for their actions even when they are not at fault. And such a thing happened with Sanjay Dutt's daughter Trishala Dutt. Trishala has been practicing self-isolation like many in the world to help beat the coronavirus pandemic. However, she was recently criticised for putting a throwback picture on his Instagram handle. The Instagram user without reading the caption went on to say some things that Trishala couldn't help but give him a piece of mind. Also Read - Did you know Sanjay Dutt was mighty annoyed with Richa Sharma when Trishala Dutt called him 'Uncle' and not 'Dad'?

In a now-deleted post, Trishala Dutt was seen in a thigh-high slit dress as she posed on the streets of New York City. She had written #TBT but the Instagram user missed reading the caption and went on to troll her and even dragged her actor-father, Sanjay Dutt in it questioning his upbringing. "I am shocked and disheartened to see this. You are a doctor yourself. New York has almost 40% of all the cases in the US of A and here instead of covering yourself with a mask and quarantine yourself, you wear so little and stand out on the Road. What example are you setting to people who follow your profile? Do you want your dad to weep for you the way you went through after your bf passed away? Common sense Trishala. @duttsanjay Yehi sikhaya hai aapne? Yehi taleem dii hai aapne?, jisme common sense kee itni kami hai? Out of concern bol raha huu…. to both of you….rest your call. Peace," the IG user had commented on the picture. Also Read - Sanjay Dutt’s daughter Trishala Dutt says people have been 'judging' her since the day she took her first breath 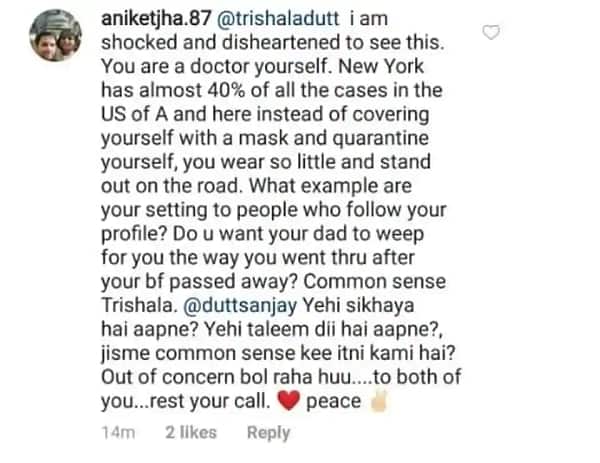 Also Read - Sanjay Dutt's daughter Trishala Dutt REVEALS she has been cheated on; her longest relationship lasted for 7 years

Trishala shut him down savagely by replying, "@aniketjha.87 your telling ME to have common sense? lol how about if you read the caption properly and obtain some common sense for yourself. A TBT means the picture was taken LONG time ago. This wasn’t taken today. Get your facts straight and read the caption properly before you come on my page & start talking Sh*t. And by the way, tagging my father isn’t going to make a difference. Nice try tho." 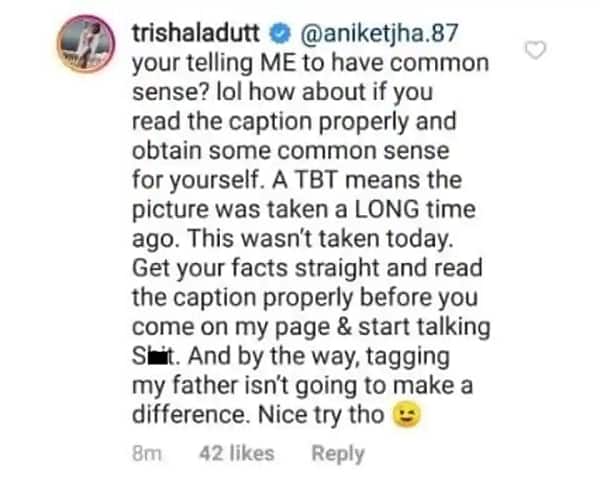