In the picture, we can see Richa holding a smol Trishala.

As you might be aware, Sanjay Dutt was married to actress Richa Sharma. They got married in 1987. Unfortunately, she was diagnosed with a brain tumour within two years of their marriage. She eventually passed away in 1996. Trishala Dutt is Richa and Sanjay’s daughter. She often shares pictures of her mom whenever she misses her. She did so again recently. Also Read - Happy Friendship Day 2021: From Salman Khan-Ajay Devgn-Sanjay Dutt to Suhana Khan-Ananya Panday-Shanaya Kapoor, these Bollywood stars redefined friendship beyond words – watch video

In the picture, we can see Richa holding a smol Trishala. She captioned the picture, “mom & I #1988 #ripmommy”. Sanjay Dutt’s current wife Maanayata Dutt liked the picture and commented on the picture by saying ‘beautiful’ with heart emojis. Also Read - Bell Bottom, Bhuj: The Pride Of India, Navarasa and more: List of movies and series arriving on OTT platforms and cinema halls to make your August super-entertaining 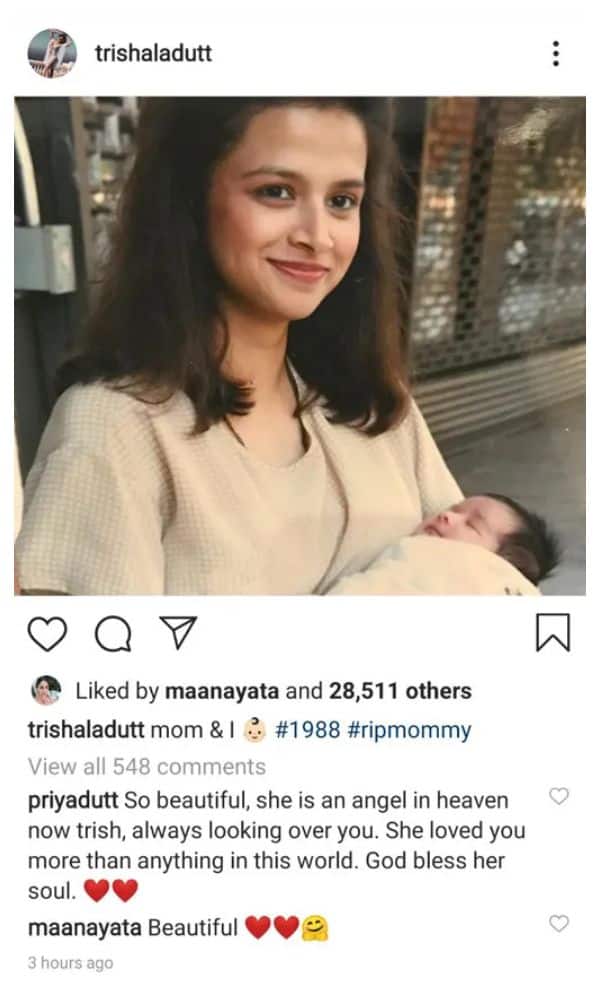 Trishala had always been away from the limelight. However, in the past few years, she has become popular on social media. A while ago there were rumours that everything was not okay between Sanjay Dutt and her. Reports suggested that Sanjay did not reach out to her after the demise of her boyfriend. Post that, we saw that Trishala and Maanayata were interacting on social media. Well, Trishala was having a chat on Instagram with her social media fam, and they asked her if the reports of the fall-out was indeed true. She replied, "Please don’t believe everything and anything that is written in tabloids. I don’t know where or who that came from but no, that’s not true."

It can be noted that there was no mention of her in Sanjay Dutt's biopic, Sanju. Trishala once said, "My attitude and temper is like my dad. My kindness, gentleness and loving side is from my mom. My giving side and style is from both my parents."

She lost her then boyfriend last year. After his demise she wrote an emotional post on social media which read, "My heart is broken. Thank you for loving me, protecting me, and taking care of me. You have made me the happiest I’ve ever been in my life. I’m the luckiest girl in the world to have met you & beyond blessed to have been yours. You will live in me for eternity. I love you & I will miss you. Until we meet again. Forever yours, xx your Bella Mia #RIP October 07, 1986 - July 02, 2019 “I love you more today than yesterday but not as much as tomorrow."