Sara Ali Khan is wholly into Coolie No. 1 fever as she shared a workout video where we can hear and see her dancing to Govinda and Karisma Kapoor starrer song, Jeth Ki Dopahri from the 1995 film. Her amazing video impressed her Coolie No. 1 co-star, Varun Dhawan and also amused Ranveer Singh. Check out Sara Ali Khan's groovy workout video below:

Coolie No. 1 is one of the most awaited films of the year. Starring Sara Ali Khan and Varun Dhawan, the remake of the 1995 romantic-comedy film is directed by the original director, David Dhawan himself. And it seems that Sara Ali Khan is into the Coolie No. 1 fever from head to toe. Y'all know how Sara Ali Khan loves working out, right? Well, the Kedarnath actress had been in the gym when the song from the original Coolie No. 1 was played. Sara could be seen working out as usual but when the song, Jeth Ki Dopahri comes on, she couldn't stop herself from grooving to it. Also Read - Sara Ali Khan flaunts her perfectly toned legs as she drops a stunning video from her Maldives diaries

Joining her is hair artist, Sanky Evrus. Sara Ali Khan even sings the Govinda and Karisma Kapoor featured song and the way their rhythms match to the song will bring a smile to your faces and remind you of the 90s era. Now, that's how a workout session should be, don't you think? Groovy, fun and with a dash of the 90s songs. "Sunehri Dupehri," Sara captioned the video post. In case you haven't yet seen the video, check it out below: Also Read - Bhoot Police actor Saif Ali Khan says he is very scared of expensive weddings and the reason will leave you in splits

Sara Ali Khan's Simmba costar, Ranveer Singh was left speechless after watching the video. "No words just no words," he wrote in the comments section. Varun Dhawan was impressed by the guy who had been working out in the background. "I love the guy trying to workout in the background," he commented on Sara's post. Designer Manish Malhotra also replied saying, "Bollywood dancing in the gym." Check out their comments below: Also Read - Sara Ali Khan kills it with her fab abs and toned figure in an exotic string bikini in the Maldives – view pics 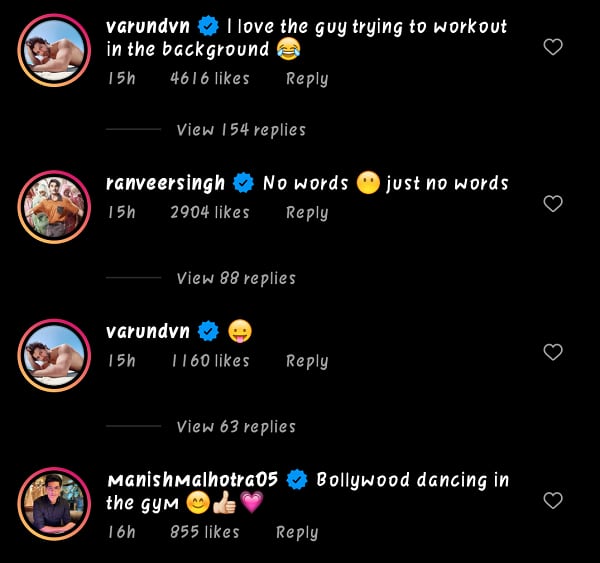 Meanwhile, for Coolie No. 1 Sara Ali Khan had a sparse diet which had even shocked Varun Dhawan. It had one main dish, a piece of bread made from grain and a few slices of cucumber. It is a known fact that she diets strictly as she is prone to gaining weight. Sara Ali Khan had opened up on her weight loss journey in an interview with Vogue saying, "I weighed 96kg and had a year to go before I graduated. The transition from pizza to salad and from lethargy to cardio is how I kickstarted my fitness journey. I simply started eating healthy and began working out when in New York."