Sara Ali Khan shares an unrecognisable throwback and reveals the one thing that hasn't changed!

Sara Ali Khan said that the transition from pizza to salad and from lethargy to cardio is how she kickstarted her fitness journey. She said that she simply started eating healthy and began working out when in New York.

Sara Ali Khan took to Instagram to share a picture in which she is seen playing cards with her friends. She also shared a throwback pic which was taken before she entered Bollywood. She was much heavier at that time and looks almost unrecognisable. Well, the common factor in both the pictures is her playing cards. Sara captioned the pictures, "Still playing cards," and, "Throwback." Also Read - Rocky Aur Rani Ki Prem Kahani: These BTS pics of Karan Johar, Ranveer Singh and the crew have already got us super-excited for the film 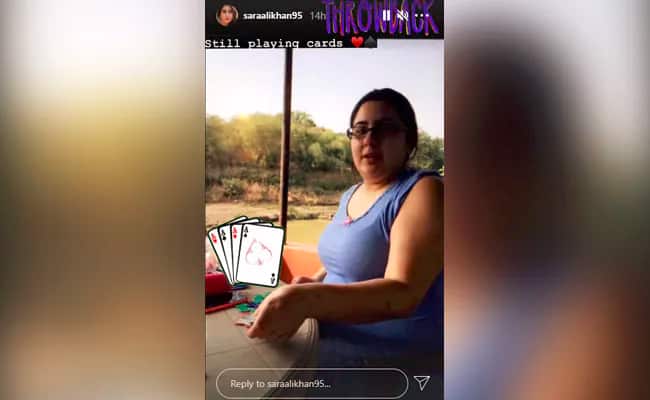 Also Read - Do Ranveer Singh and Akshay Kumar play bullies or buddies to newcomers on the sets? Sooryavanshi actor Mrunal Jain reveals it all [Exclusive]

The Kedarnath actress had opened up about her weight loss and transformation journey on during Karan Johar's talk show Koffee With Karan a few years ago. During the show, two clips were shown featuring Sara Ali Khan from when she was studying in Columbia University. She weighed 96 kilos then. Sara had said, "I had PCOD. I still do and because of that I think I put on the amount of weight that I did." Also Read - Ram Gopal Varma REVIEWS Vijay Deverakonda's Liger; calls him 'a SUPER CROSS between Mahesh Babu, Pawan Kalyan, Ravi Teja and Tiger Shroff'

The actress told Vogue India that the transition from pizza to salad and from lethargy to cardio is how she kickstarted her fitness journey. She said that she simply started eating healthy and began working out when in New York.

Sara Ali Khan was seen in Imtiaz Ali’s Love Aaj Kal with Kartik Aaryan. She was trolled for ‘overacting’ in the trailer. Talking to Film Companion, the Coolie No 1 actress had said that was affected a lot at that time. She said that she does not mind being trolled for being fat r for wearing a cap. “But I am here to act. That is my job. That is my profession. That is serious. So, when I am trolled for that, suddenly, with all the confidence still intact, it is harder for me to sit there and say ignore the trolls. For the first time, it actually kind of hurts. It hit me.”

The actress defended herself by saying she was aware of her character and added that they were not allowed to see the monitor. She said that she had no idea what it was looking like. “I’ve spoken to Imtiaz sir about this and what’s also happened is the fact that I don’t look good in that. When it comes to trolling for overacting, I’ll be honest with you…not only was I acutely aware of what my character had to feel but Imtiaz sir made me feel exactly what Zoe had to feel at in that point of time,” said Sara.