Shah Rukh Khan's daughter Suhana Khan is one of the most popular star kid on social media. She enjoys a fan following of 1.4 million. Suhana Khan had shared a selfie on her social media handle that got her loads of attention. Check it out below:

Shah Rukh Khan's daughter is turning into a glam chic these days. She has been sharing a lot of pictures on her social media handle and each chic than the previous one. Recently Suhana Khan shared yet another her famous mirror selfies and it has got everyone gushing. Amitabh Bachchan's grand-daughter Navya Naveli was all smitten upon seeing the glamorous avatar of Suhana. She dropped a hearts in eyes emoticon on Suhana Khan's post to expressing her feelings about her picture. Talking about which, Suhana Khan who is learning the ropes of glam makeup can be seen wearing kohl eyes on her lower lash line. She also wore a think liner and had painted her lips in gloss. She let her hair loose on her shoulder. The lighting has worked its magic too. Suhana Khan looks just like her mother Gauri Khan. It's them in the genes. Check out Suhana Khan's post here: Also Read - Shah Rukh Khan's daughter, Suhana Khan, shares pictures of her luxury apartment in New York 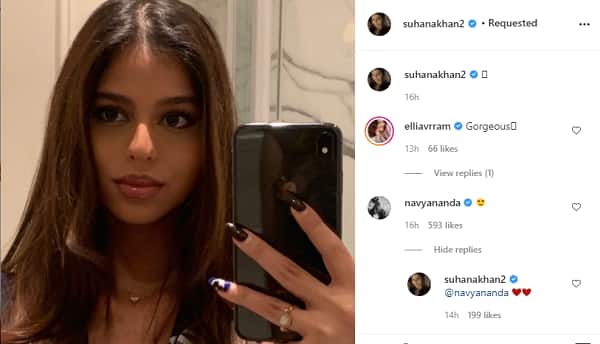 Also Read - Deepika Padukone, Disha Patani, Suhana Khan — which Bollywood diva do you wish to see with BTS' V in a music video?

Being a star kid, Suhana Khan is not unknown to trolls. She had been bullied by loads because of her skin tone. Suhana had addressed all the derogatory remarks in a post seeking to end colourism. "There's a lot going on right now and this is one of the issues we need to fix!! this isn't just about me, it's about every young girl/boy who has grown up feeling inferior for absolutely no reason. Here are just a few of the comments made about my appearance. I've been told I'm ugly because of my skin tone, by full grown men and women, since I was 12 years old. Other than the fact that these are actual adults, what's sad is that we are all indian, which automatically makes us brown - yes we come in different shades but no matter how much you try to distance yourself from the melanin, you just can't. Hating on your own people just means that you are painfully insecure. I'm sorry if social media, Indian matchmaking or even your own families have convinced you, that if you're not 5"7 and fair you're not beautiful. I hope it helps to know that I'm 5"3 and brown and I am extremely happy about it and you should be too. #endcolourism"," Suhana Khan had said.