Sushant Singh Rajput case: ‘The nation wants to know what happened with him,’ says Ankita Lokhande as she joins #CBIForSSR movement

Ankita has been supporting Sushant's family throughout and wants to find out the real culprit. She had said that Sushant was happy to go lucky guy and cannot take such a drastic step.

It's been nearly two months since Sushant Singh Rajput passed away. Now, almost every day there are new updates in the Sushant Singh Rajput case. Now, his former girlfriend, Ankita Lokhande, has released a video in which she is asking for a CBI probe in the case. “The nation wants to know what happened with Sushant Singh Rajput. Justice for Sushant, CBI for SSR.” Also Read - Bigg Boss 15: Is Raqesh Bapat entering Salman Khan's show? Bigg Boss OTT finalist reveals [EXCLUSIVE]

Ankita has been constantly saying that she does not believe that Sushant Singh Rajput was depressed and can commit suicide. The actress has been supporting Sushant's family throughout and wants to find out the real culprit. She had said that Sushant was happy to go lucky guy and cannot take such a drastic step. Sushant Singh Rajput was found dead on June 14 at his residence in Bandra. Also Read - From Divyanka Tripathi to Nia Sharma: 10 TV actresses who garnered massive fan following and huge career growth in a short span

Earlier, Kriti Sanon also extended her support in CBI probe for Sushant Singh Rajput. She shared an emotional note on her Instagram story, which reads, “I Pray that the truth comes out SOON..His family, his friends, fans and all loved ones deserve this closure.. I hope and pray that the CBI takes over the case so that it’s investigating without any political agendas, in the TRUE sense, to provide justice to the family!! Its high time his soul rests in peace! #CBIForSSR #SushantSinghRajput” Also Read - Trending TV news today: Anupamaa's Rupali Ganguly and Gaurav Khanna get goofy on Baspan Ka Pyaar, Kamya Panjabi regrets not meeting Sidharth Shukla and more 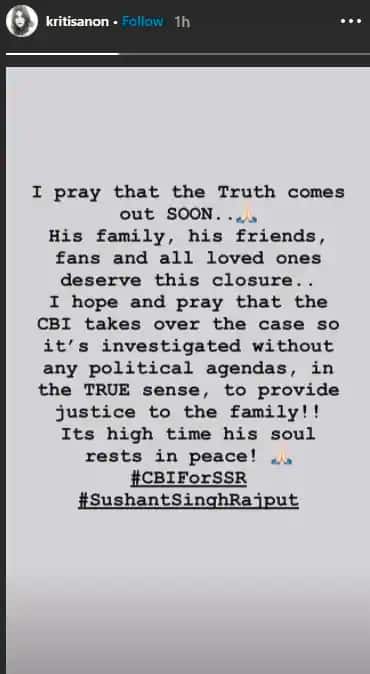 Sushant last spoke to his girlfriend Rhea Chakraborty nine days before his death and that too for a very short span of time, showed the call detail records (CDRs) accessed by IANS. According to the CDR, Rhea and Sushant spoke on June 5 twice for a very short period, when the conversation lasted for less than two minutes. The CDRs showed that Sushant made a call to Rhea on June 5 at 8.19 a.m. which lasted for 114 seconds.

Well, we hope that this case ends soon.