Taapsee Pannu finally addressed the IT raids and reports alleging about the deets about the raids. Taapsee Pannu has also taken a sly dig at Kangana Ranaut's 'Sasti copy' remark for her.

A couple of days ago, it was reported that the IT department had raided filmmakers Anurag Kashyap, Vikas Bahl and Taapsee Pannu's homes. The filmmakers happened to be former partners at Phantom Films which was dissolved in 2018. Yesterday, new details about the raid had surfaced. It was said that the officials had 'found evidence related to manipulation and under-valuation of share transactions of Phantom Films amongst the film directors and shareholders, having tax implication of about Rs 350 crore.' On raiding Taapsee Pannu's house, the reports said that the official had found cash receipts of about Rs 5 crore. There were also a few more details of the Thappad actress having a Bungalow in Paris and more. Also Read - From premarital sex to approval on beau Shane Gregoire, Anurag Kashyap and daughter Aaliyah's recent convo is a lesson in modern parenting

Taapsee Pannu had kept mum on the matter until now. Taking to her Twitter handle, the Soorma actress said, "3 days of intense search of 3 things primarily 1. The keys of the “alleged” bungalow that I apparently own in Paris. Because summer holidays are around the corner. 2. The “alleged” receipt worth 5 crores to frame n keep for future pitching coz I’ve been refused that money before Pouting face. 3. My memory of 2013 raid that happened with me according to our honourable finance minister P.S- “not so sasti” anymore." The last bit happens to be a dig at Kangana Ranaut who on several occasion had addressed Taapsee as her sasti (cheap) copy. Have a dekko at her tweets here: Also Read - Kalki Koechlin shares a gorgeous black and white picture with daughter Sappho and it's about pandemic life 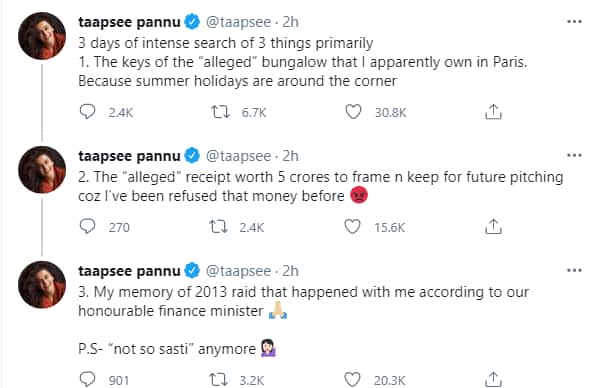 Kangana Ranaut replied to Taapsee's tweet saying, "You will always remain sasti because you are sab rapists ka feminist... your ring master Kashyap was raided in 2013 as well for tax chori... government official’s report is out if you aren’t guilty go to court against them come clean on this ... come on sasti." Also Read - Trending Entertainment News Today – Zareen Khan CLAIMS she was told to put on weight for Salman Khan's Veer; Farhan Akhtar announces new release date of Toofan 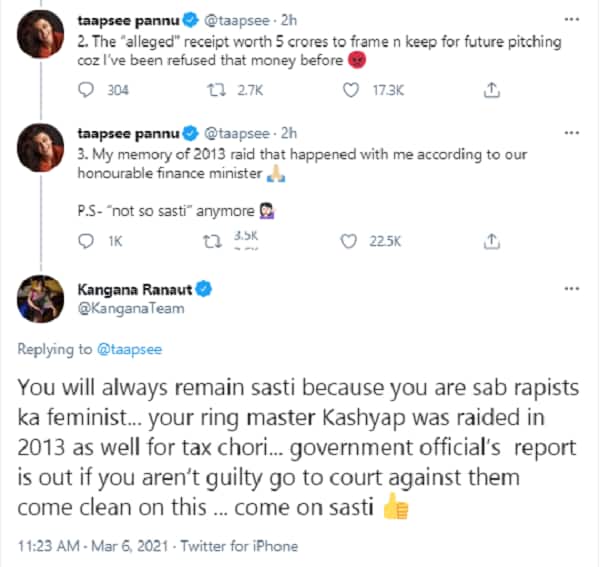 After the raid reports at Taapsee Pannu and Anurag Kashyap's houses, Kangana Ranaut has been tweeting out about raids. He has called out Kwan too and has also spoken about the MeToo controversy. ccording to Hindustan Times, the official said that they "found evidence related to manipulation and under-valuation of share transactions of Phantom Films amongst the film directors and shareholders, having tax implication of about Rs 350 crore." They further said, "evidence of cash receipts by the leading actress amounting to Rs 5 crore has also been recovered."

"The searches, part of a tax evasion probe against Phantom Films and carried out across 30 locations in Mumbai and Pune, also covered Reliance Entertainment group CEO Shibhasish Sarkar and some executives of celebrity and talent management companies KWAN and Exceed," they said. "Documents and computer peripherals have been recovered from various premises," officials said.