Rapper and singer Yo Yo Honey Singh has finally broken the silence in domestic violence case filed by his wife Shalini Talwar. As he shared his official statement, he found support in friends like Tony Kakkar, Aparshakti Khurana and others.

A few days ago, Yo Yo Honey Singh made it to the headlines for all the wrong reasons. His wife Shalini Talwar filed a domestic violence case against him. Reportedly, his wife of 20 years accused him of sexual violence, mental harassment, cheating and financial fraud. Now, Honey Singh has broken his silence. Taking to Instagram, he shared his statement calling all the allegations made by Shalini 'false and malicious'. As he shared his side of the story, he found support in Tony Kakkar, Aparshakti Khurana and others. Also Read - Trending OTT News Today: Money Heist season 5 sets screens on fire, Helmet gets a thumbs up, Neha Bhasin turns emotional on Bigg Boss OTT and more

On Honey Singh, statement, Goa Beach singer Tony Kakar wrote, "Always there to support you paahji. God is with you." Dangal actor Aparshakti Khurana commented, "#StayStrong Paaji. Waheguru meher karey." Jubin Nautiyal also commented, "This too shall pass babaji , don't worry." In his official statement, Yo Yo Honey Singh has strongly refuted all the allegations made by his wife. He refrained from further commenting on the case as the matter is sub-judice. Also Read - Helmet movie review: Aparshakti Khurana-Pranutan Bahl starrer puts the 'comedy' into condoms but also reminds us they're no funny business

A part of his statement read, " “I have never issued a public statement or press note in the past despite being subjected to harsh criticism for my lyrics, speculation on my health, & negative media coverage in general. However, I see no merit in maintaining a studied silence this time because some of the allegations have been directed at my family my old parents and younger sister who have stood by me during some very difficult and trying times and comprise my world. The allegations are cynical and defaming in nature (sic).” Also Read - Ayushmann Khurrana roots for brother Aparshkati's Helmet in the cutest and fun way possible – Watch

A post shared by Yo Yo Honey Singh (@yoyohoneysingh) 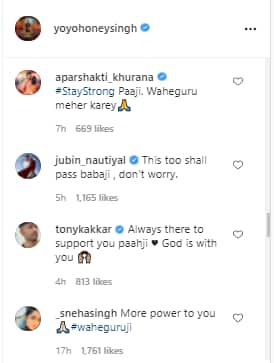 He also wrote, "I strongly refute all the allegations but will not comment any further because the matter is sub-judice before the Court of Law. I have full faith in the judicial system of this country, and I am confident that the truth will be out soon." In the end, he requested everyone to not draw any conclusions about him and his family until the verdict is out.