Burberry mistook Riz Ahmed to be Dev Patel got a good firing from Asians who were offended by their goof up. Check out their tweets. 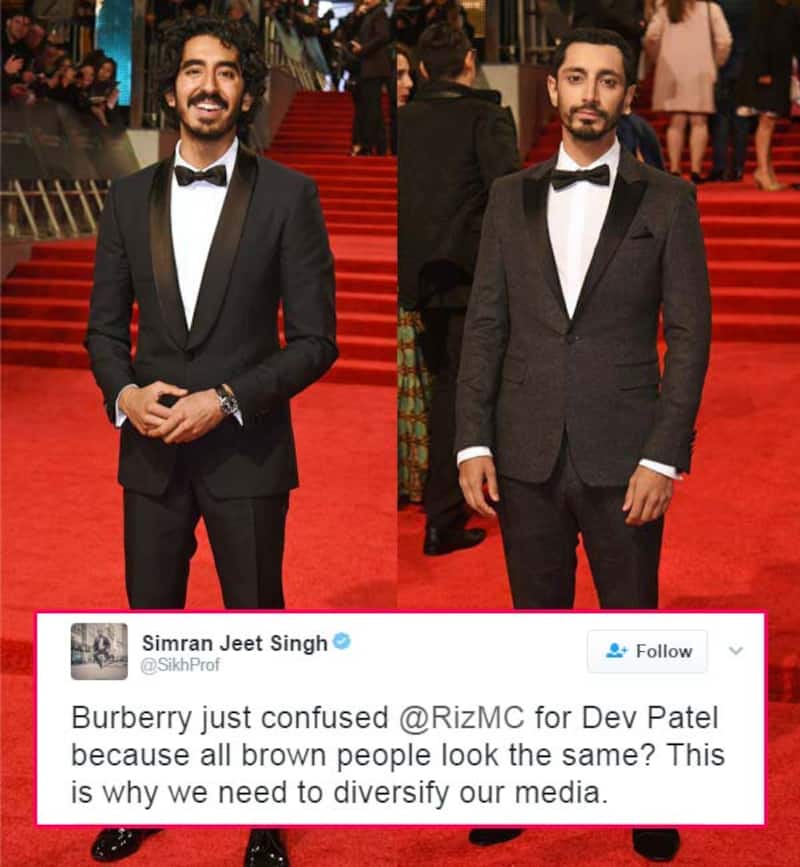 Brown person all look the same? questions social media as Burberry mistakes Dev Patel to be Riz Ahmed. Yes, this happened. You all may remember very well that Dev won his first BAFTA on Sunday evening for Lion. For the same, the actor wore a crisp navy tuxedo by Burberry. Hence, to congratulate the actor on winning the trophy, the official handle shared a tweet stating, "Celebrating the #EEBAFTAs in London this evening, Best Actor in a Supporting Role winner #DevPatel wears a @Burberry custom made navy tuxedo." But they made a boo-boo there. Instead of adding Dev's image, the brand uploaded Riz Ahmed's pic. Riz Ahmed of Star Wars: Rogue One fame, was also present for the red carpet, and wore a custom made suit by the same brand. Although they immediately pulled down the tweet, it was perhaps a little too late. Because a lot of people picked it up and started shaming Burberry for mixing up two actors for their colour. Also Read - Trending OTT News Today: Leonardo DiCaprio and Jennifer Lawrence's Don't Look Up teaser is quality personified, Riz Ahmed and Octavia Spencer's Encounter teaser looks like sci-fi gold and more

One of the tweets read, "Burberry just confused @RizMC for Dev Patel because all brown people look the same? This is why we need to diversify our media." Another tweet stated, "Dear @Burberry All asian men look the same now?#RIZAHMED #DevPatel" Basically, the Asians who read the tweet were mighty furious and demanded an explanation for the same.Of course, Burberry did apologize for the same but they sure hurt sentiments of Asians. “We apologise unreservedly for the incorrectly titled pictures of Dev Patel and Riz Ahmed posted late last night. This was a mistake that should not have happened and was corrected immediately. We have apologised directly to Dev and Riz. We are checking our processes to make sure this doesn’t happen again.” quoted Burberry to The Wrap. You can check out the tweets of furious Asians below. (ALSO READ - BAFTA awards 2017: Dev Patel goes speechless, quite literally, as he accepts the trophy - watch video) Also Read - Phobia, Gone Girl, Nightcrawler and 7 other BEST psychological thrillers to watch today on Amazon Prime Video, Netflix, ZEE5 and VOOT

Burberry just confused @RizMC for Dev Patel because all brown people look the same? This is why we need to diversify our media. pic.twitter.com/d4iIITHNdo

They rectified their tweet - Also Read - Enjoyed the Friends Reunion? How about a Hum Paanch reunion then? Vidya Balan aka Radhika answers [EXCLUSIVE VIDEO]

Celebrating the #EEBAFTAs in London this evening, Best Actor in a Supporting Role Winner #DevPatel wears a @Burberry custom made navy tuxedo pic.twitter.com/pj6Fwy8XCm

Dev has won a BAFTA and is also nominated for Academy Awards that will be happening in two weeks. Perhaps this could be a cue to winning the Oscars as well. Already Patel's performance in Lion has roused a lot of applaud and appreciation. Be it critically or in terms of awards, the film is taking home a lot of accolades. With their spectacular win at the BAFTA, hopes are pretty high that the film might get many more Academy awards this year. Anyway, we're super excited for the Oscar! What about you, BollywoodLifers? Tell us in the comments section below. Stay tuned to this space for hot scoop and latest updates.