Cannes 2022: Deepika Padukone gets brutally trolled for being 'confused' about her role as jury; netizens say, 'Priyanka Chopra would have given apt response'

Netizens were left baffled when Deepika Padukone answered a question about her role as Cannes 2022 jury and how she will judge films throughout the film festival. Her answer has now sparked a meme fest on social media. 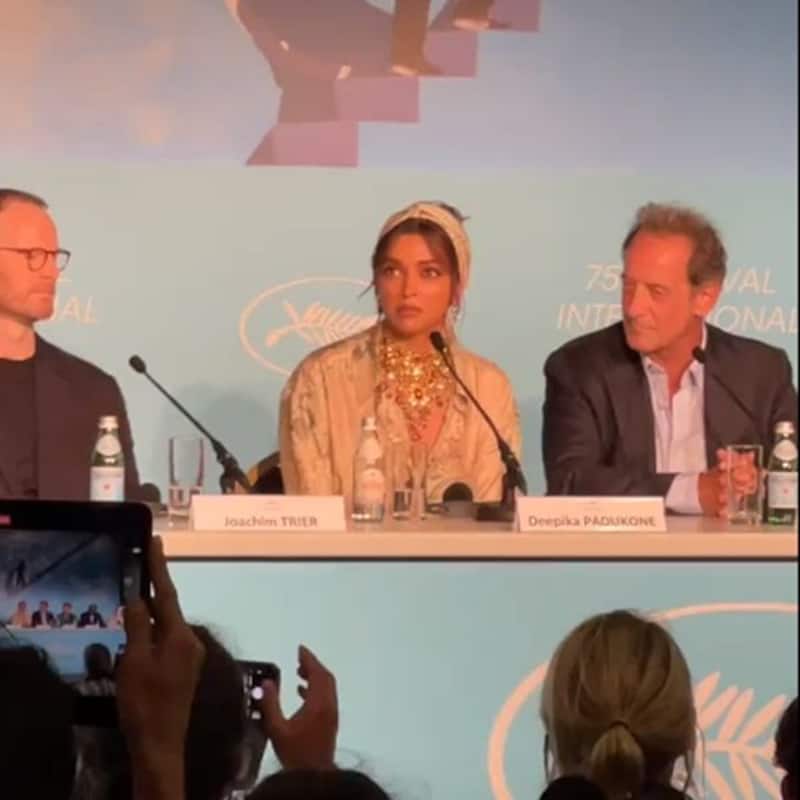 Deepika Padukone attended jury duty on the opening day of Cannes 2022 in Sabyasachi ensemble. She stood tall in flowing lime green pants and a beachy shirt embellished with floral designs. However, a video clip from the press conference where Deepika explained her role as a jury member from the 75th Cannes Film Festival has gone viral on the internet for all the wrong reasons. Also Read - Desi girl Priyanka Chopa Jonas once again floors the West with her latest launch

Netizens were left baffled when Deepika answered a question about her role as a jury and how she will judge films throughout the festival. "I think we are all aware of the fact that it is a huge responsibility. But, I think, we have also made a promise to each other yesterday that we are not going to burden ourselves with that responsibility. I think the idea is to remind ourselves of that audience, or of that young child who’s grown up watching movies and been inspired,” Deepika replied. Also Read - Deepika Padukone to Shah Rukh Khan: These 8 Bollywood actors were ACCUSED of hurting religious sentiments; here's why!

She continued, "I think cinema is such a powerful tool, such a powerful medium, it has the ability to impact people’s lives and touch and influence people’s lives. So, I think, for the next two weeks, [we must forget] that we have this burden and this responsibility and actually just enjoy the creative process, that's sort of what we are all here to do. I think we are all creative people. I don’t think any of us have the capacity to judge, or critique, or criticize." Also Read - International bikini day 2022: Disha Patani, Esha Gupta and more B-town actresses who set water on fire with their bold avatars

Many people said Deepika appeared confused about her jury duties and felt that Priyanka Chopra would have given an apt response to the question. Deepika's answer has now sparked a meme fest on social media. However, there were only a few people who thought Deepika gave the answer with a lot of positivity. Take a look.

They should have considered Priyanka Chopra as jury as she us so talented and crystal clear. I love PC❤❤

I mean the number of times she says “I think”… The jury needs much more than just a pretty face. She is representing the Indian cinema , india for god’s sake. These are times when I feel Priyanka would given such an apt response! pic.twitter.com/h0E83g8FaA

This is what happens when you have not done the homework and are not attentive enough in class. Been through such moments in class 6, 7 & 8 ?

I think she gave a beautiful answer. A very positive reply indeed; focusing on seeing the roses rather than focusing on its thorns. @deepikapadukone

To people who pretend not to comprehend her reply - well that's exactly why she is at the other end of the screen, as a part of Cannes' jury, unbothered by y'all, who are, on the other hand, trying to bring her down and failing miserably

Earlier on Monday, Deepika, a regular at Cannes since 2017, shared a video on her Instagram handle saying that she had landed in French Riviera. In the video, she gave a glimpse of Cannes and talked about her 11-hour flight from Los Angeles. Immediately after landing, she showed up for the festival-eve dinner at Hotel Martinez in a sequined rainbow-hued Louis Vuitton dress and brown high boots.