Now, this is indeed very disturbing. As per a report in an entertainment portal, comedian Siddharth Sagar has gone missing since four months. It seems his phone is unreachable, which has left friends worried. The young man from Delhi, began his career in 2009 with Comedy Circus - Chinchpokli to China. He has also done shows like Chote Miyan Bade Miyan, Comedy Classes, Pritam Pyare Aur Woh. One of his friends, Somi Saxena posted a message on Facebook asking for help to find Siddharth. The news of his 'missing' is spreading like wild fire. Bollywood Life got in touch with comedian Mubeen Saudagar, who knows Siddharth since a while. He said that he is unaware of him being missing and just heard of this development. We are yet to get clarity on the matter but we hope that he is safe. The comedian made news when he was embroiled in a slap gate incident with Bharti Singh. It seems he went overboard and slapped her quite hard. Bharti conveyed her displeasure to the production house, Optimystix and they told him to quit. He confirmed the incident to papers as well. There was no news of him being in some trouble or so, which is why it is all of this is so surprising. His phone is unavailable. Also Read - From Sunil Pal to Raju Srivastava – 6 comedians who rose to fame but are missing from TV screens now – view pics 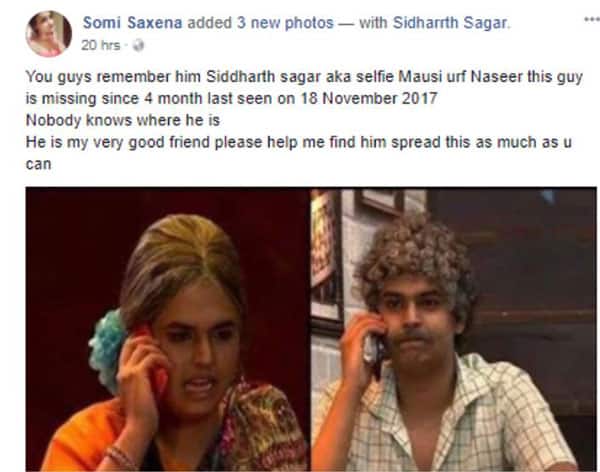 Also Read - Shilpa Shinde to QUIT Gangs of Filmistan? says, 'We are getting tortured'

In 2016, actor Vishal Thakkar went missing. The actor was previously accused of rape by his girlfriend. According to his family, the lady's alleged false accusation sent him into depression. He was not getting much work as well. This was said to be the reason behind him missing from action. He is still not found. We just hope that Siddharth is fine and back with his loved ones soon! Also Read - Not The Kapil Sharma Show, but Sunil Grover to make a TV comeback with THIS project