Those expecting to see an interaction between host Sajid and his ex-girlfriend Jacqueline will be disappointed as the Dishoom actress will not be in tonight's episode!

Riteish Deshmukh and Pulkit Samrat are on a promotional spree with their next, Bangistan. The two will be seen spreading word about the film on various reality TV shows including Jhalak Dikhhla Jaa Reloaded and Comedy Night With Kapil. While many are eagerly waiting to see Riteish and Pulkit's drama on JDJ, fans are also keen to see the Bangistan cast on CNWK. As we all know, apart from Pulkit and Riteish, the film also stars Jacqueline Fernandez, who happens to be Sajid Khan's ex girlfriend. The filmmaker is filling in for Kapil Sharma as host, since the the latter has been advised bed rest following a slip disc injury.

Sajid and Jackky dated for three years and went their separate ways in the year 2013. Since then the two haven't spoken to one another and we were hoping that the same would happen on tonight's episode where the star cast of Bangistan will be seen promoting their film. But hard luck guys, as Jackky is currently away shooting for her film Dishoom with Varun Dhawan and John Abraham!

Sajid posted a picture with Riteis, Pulkit and Jackky is nowhere to be seen: 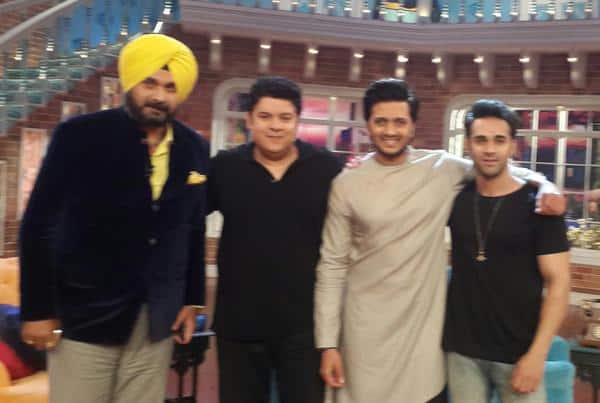 Ah well...even though Jackky won't be there, we bet the episode will be entertaining with Pulkit and Riteish around. Don't forget to tune in to Colors tonight at 10!