Confirmed! Parth Samthaan to COME BACK on Kaisi Yeh Yaariyan!

Is this happening because of his fans who went berserk on Twitter, asking PM Narendra Modi to bring him back or him opting out for Hawa Hawai? Find out!

This has got to be the best day for all Parth Samthaan fans. The actor is all set to come back on Kaisi Yeh Yaariyan! So ladies, you can once again see your beloved Manik on the small screen. Ever since Parth's exit from the show, his die hard fans have been devastated and waiting for a miracle to happen. Well the wait is over guys, as BollywoodLife has received a confirmation on Parth's re-entry in Kaisi Yeh Yaariyan season 2 very soon. As we all know, Parth had announced his exit a while back, which obviously put his fans in a frenzy. Reports suggested that the actor had opted out of the show as he was all set to be seen in Bigg Boss 9. The same however turned out to be false, when it was reported that Parth had been roped in for a new show Hawa Hawai. This show didn't pan out for the actor as rumours were abuzz that Parth was kicked out, owing to unprofessional behaviour. He however maintained that he himself opted out and not otherwise. Also Read - Temptation Island Remake: After Nikki Tamboli, we would like to see THESE 5 TV celebs on the reality dating show

We guess since the future didn't work out for Parth as he expected it would, the actor is making a comeback. We can picture the fans out there, doing the victory dance! Also Read - Kasautii Zindagii Kay 2 reunion: Parth Samthaan, Hina Khan, Erica Fernandes and others party hard – see pics

After all, they did whatever they could to demand his re-entry in the series, including calling out to PM Narendra Modi for help. Yeah, no kidding. Check this out: Also Read - Shabir Ahluwalia, Hina Khan, Gashmeer Mahajani and more - TV celebs whose exit from shows made a lot of noise 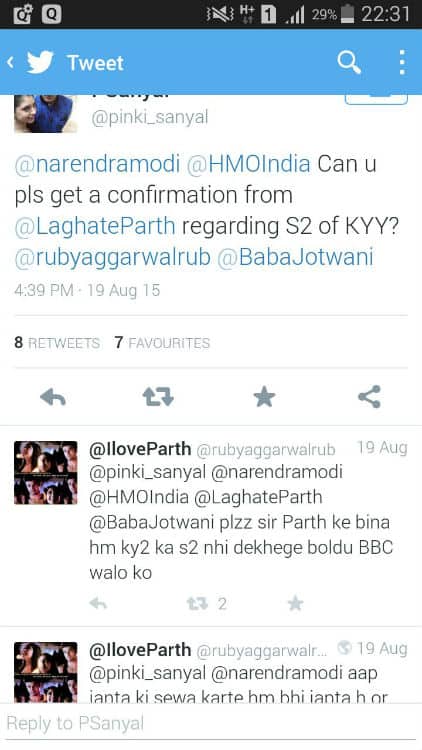 There was an outrage over Twitter post Parth's exit from Kaisi Yeh Yaariyan. Fans took to the popular micro blogging site and demanded that he brought back. The brunt of their wrath was borne by his co-star Niti Taylor aka Nandini, who took to Twitter and asked fans to give season 2 a chance.

So Samthaaniacs, your Parth aka Manik is back. Are you happy now? We bet you are!