The superstar wrote a letter to Tamil Nadu Chief Minister, disclosing his contribution for the flood victims

Incessant rains battered Chennai for last few days, creating the worst flood in the history of India. While the rains have subsided and the water logging is slowly receding, the ordeal for Chennaites is far from over. Also Read - After Shah Rukh Khan, Akshay Kumar donates Rs 1 crore for Chennai flood relief!

While actors like Siddharth, RJ Balaji, Madhavan, Dhanush, Rana Daggubati and Jayam Ravi are helping out people by collecting and providing the basic requirements to flood victims, actors like Allu Arjun, Rajinikanth and Mahesh Babu have donated money for the relief work. Also Read - Rajinikanth proud of all his fans' efforts in handling the relief operations of Chennai Floods!

We have stumbled upon the letter which the Dilwale superstar had written to Tamil Nadu Chief Minister J Jayalalithaa, requesting her to accept his generous contribution. The donation of Rs 1 crore was made by SRK along with his Dilwale team and his production house Red Chillies Entertainment. Here's the letter which SRK wrote to J Jayalalithaa: 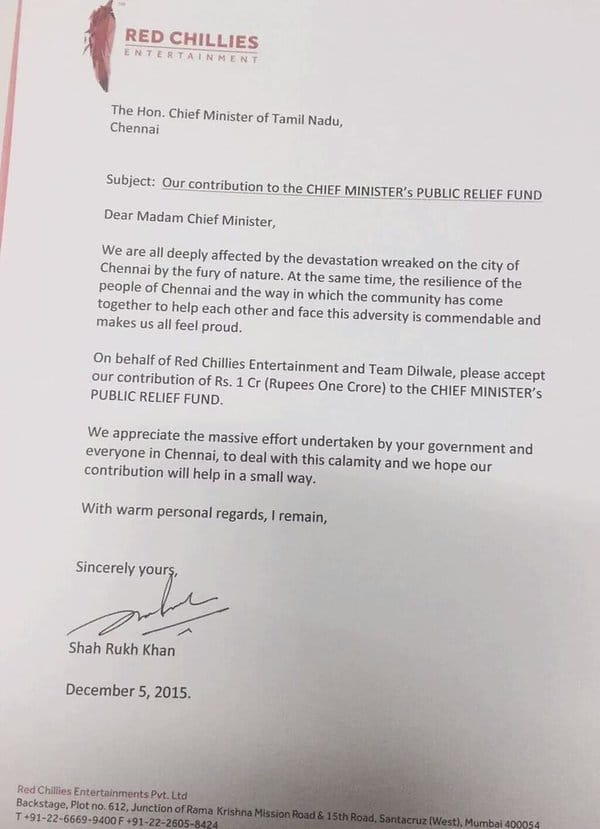 We salute Shah Rukh for his kind gesture. But going by cheap politics played by Amma and her AIADMK government, we can just hope that Tamil Nadu government put that money for actual relief work!