Coronavirus pandemic is the harshest reality for the world right now. India, like other nations is also grappling with the issue. Actress and producer Karim Morani's daughter, Zoa Morani was admitted to the Kokilaben Dhirubhai Ambani Hospital in Andheri (West) for treatment. She started feeling better within a span of four days. Zoa Morani has now been discharged and she is happy to be home. She posted a selfie to update her fans on the same. In the background, we can see staffers wearing hazmat suits. She put a caption, "Time to say goodbye to my warriors from space and keep them in my prayers forever! Goodbye isolation ICU. Time for #homesweethome!" Also Read - Coronavirus pandemic: Zoa Morani donates blood for COVID-19 plasmatherapy after recovering from the deadly disease 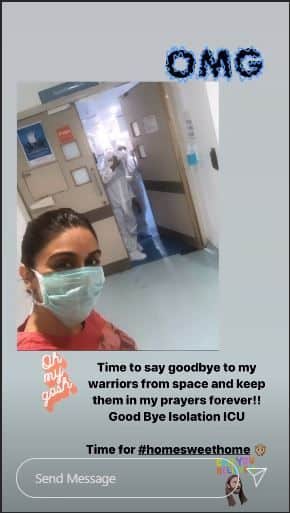 Zoa Morani was travelling to Rajasthan in the month of March. She got back around March 15. It seems she had a cough and cold, which did not go away even after 14 days. Her sister, Shaza was also back from a vacation in Sri Lanka. She also had a cough and cold. In a scary development, both the girls tested positive. Shaza got admitted to Nanavati Hospital. But her second tests came negative so she got discharged. Earlier, Zoa wrote, "Ever since I came to the hospital, I have definitely felt 40 times better. My breathlessness stopped on the second day, I could feel a little congestion and a little fever, but it’s so much better than I was feeling at home." Also Read - Producer Karim Morani tests positive for Coronavirus for the second time?

She further wrote, "Coming to the hospital was the best decision. I feel like I got cured immediately and I can go home." Zoa also did a live chat with Varun Dhawan. Karan Johar and Alia Bhatt also joined in the chat where they wished her a speedy recovery. Zoa Morani's father Karim is admitted to the Nanavati Hospital for COVID-19. We hope everyone recovers soon!