Countdown begins! Katrina Kaif confirms that the Thugs of Hindostan trailer will release on September 27

Thugs of Hindostan is one of the biggest films of the year and since it is a Diwali release, we are quite stoked about it. Now, that is not the only reason we are waiting for it with a bated breath. You see, it is the first time that such a casting coup has been pulled off. Amitabh Bachchan, Aamir Khan, Katrina Kaif - all in one film! Don't blame us for getting as excited as we are. And the makers of the film are all set to keep our interests piqued, which is why they are releasing the trailer as early as this week.

That's right. The trailer of Thugs of Hindostan will be released on September 27, which is the upcoming Thursday. Don't know about you guys but we can't contain our excitement over this. While an official announcement is awaited, Katrina Kaif revealed this interesting piece of info while chatting with her fans on Instagram. Check out her story here: 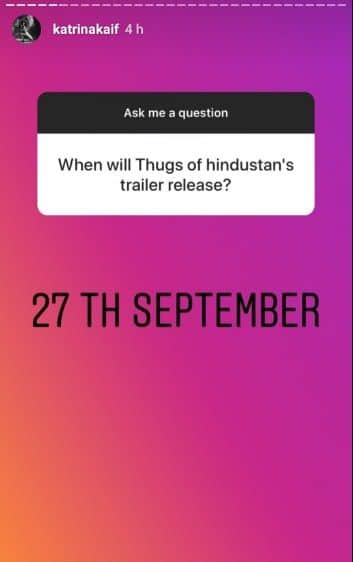 We can't thank Katrina enough for sharing this with her fans much before an official announcement is made. Well, and now we are counting down the days for the trailer's release since it is not every day that a film of such scale is made, especially in Bollywood. The logo of the film and the character sketches of the actors already have us rooting for them.

YRF's Thugs of Hindostan also stars Fatima Sana Shaikh. The film is directed by Dhoom filmmaker Vijay Krishna Acharya. It has been shot extensively in Bangkok and Film City. It is all set to release on November 8 and we can't wait!